The 1948-1953 Chevrolet Series 3100 half-ton pickups benefited from a redesign that took Chevy trucks into a new era of comfort, convenience, and style.

Chevy's restyled "Advance-Design" trucks were introduced in 1947, well ahead of its first new postwar cars, and little changed in appearance through 1953. The basic intent was to provide more room and comfort for occupants.

All Advance-Design pickups had a new bench seat accommodating three persons, instead of the old separate seats -- and for the first time the seat was adjustable for leg reach.

The cab, described as "Unisteel Battleship" construction, was larger in every direction. New extra-wide doors swung open on concealed hinges and extended down to cover the sills. Glass area grew considerably via a wider windshield, side windows, and backlight -- Chevy called the result "Observation Car Vision."

Features of the 1948-1950 Chevrolet Series 3100 half-ton pickup included advances such as interior door locks, better steering, and a roomier cab.

Interiors were more colorful than ever before on a commercial Chevrolet, and the dashboard was functional and more glittery.

The 1948-1953 Chevrolet Series 3100 half-ton pickups also featured "four-fold ventilation" through the easy-crank-down side windows, cowl-top ventilator, foot-operated floor vent, and a fresh-air inlet on the curb side of the cowl.

Changes through the period included gray (instead of body-color) inner grille bars for 1949; vent wings, a lower rear-view mirror, and elimination of left-hand cowl vents for 1951; pushbutton (instead of rotating) door handles for 1952; and a slimmer hood nameplate for 1953. 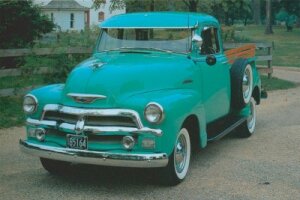