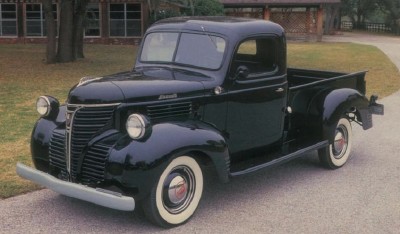 The 1941 Plymouth PT-125 pickup differed little from its 1940 predecessor or, for that matter, from the 1939 model. And with good reason; Plymouth may have known its truck venture wasn't long for this world.

The 1939 Plymouth trucks had been thoroughly revamped with a new cab and totally different styling that no longer imitating the passenger cars. Rather, Plymouth finally had give its trucks a huskier look more suited to the breed.

But not everybody liked the new look. Critics said the front fenders were too bulbous and the hood to high and rounded. On the other hand, the rear fenders were fully skirted and all fenders sported "speedlines" to impart a feeling of motion.

In a major change from pre-1939 models, the cab was moved forward and the pickup box lengthened. This changed the proportions enough to lose the long-hood look of the mid-1930s models. Plymouth was now able to advertise a "big roomy 3-man cab [with] oversize dimensions."

Sealed beam headlamps were added for 1940. The price jumped to $625 for the 1941 Plymouth PT-125 pickup, though styling changes were modest: cowl-mounted parking lights, headlights moved out to the centerline of the fenders (looking rather frog-eyed), a neat chrome "V" on the vertical front edge of the grille, and nameplates moved to the center of the hood.

Horsepower of the famous L-head six rose to 87. The options list included many heavy-duty extras and, since the basic truck was quite spartan, Plymouth listed a number of safety and appearance items: right-hand taillight, dome light, chrome headlights and cowl lamps, chrome windshield frame, grille guard, dual horns, sun visor, inside mirror, and spare wheel lock. (All of the above cost a mere $32.)

Plymouth trucks were built on the Dodge truck line but in much smaller quantities. In 1941 only 6,073 Plymouth pickups were built, while Dodge delivered more than 54,000 half-ton trucks to the government alone. For 1942, Plymouth fielded only a car-based utility sedan, and built just 80 of those.

Collectible Minuses of the 1941 Plymouth PT-125

Note the fancy "speedlines" at the bottom of the fenders of this 1941 Plymouth PT-125.