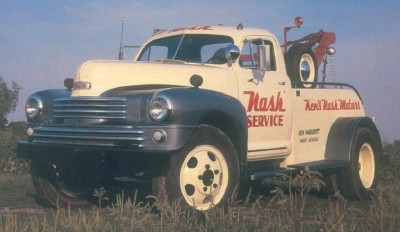 However, American Nash dealers could order them for their own use, and most that made it onto U.S. roads ended up as tow trucks.

Handsomely styled inside and out, the 1947-1954 Nash truck is one of the most interesting oddities of the early postwar years. Two types were initially offered: the 133-inch-wheelbase Nash Model 3148 and the 157-inch Nash Model 3248.

Identical otherwise, they weighed 4,810 and 4,887 pounds respectively, with cab. Gross Vehicle Weight was 14,000 pounds, or 15,500 when equipped with a two-speed rear axle and larger tires.

Styling of the 1947-1954 Nash Model 3148 was based on the 1946-1948 Nash car, but not identical: the grille, for example, was simpler and the lower portion did not wrap around the front fenders. Parking lights were round, not rectangular as on the car, and were mounted lower. A less ornate Nash badge decorated the hood.

The interior of the 1947-1954 Nash Model 3148 looked less spartan than most trucks of the day, and the engine-turned metal dash panel was especially handsome.

Power came from the 234.8-cid, overhead-valve Ambassador six, which gave Nash a leg up on most of its competitors, especially overseas. But this was no short-stroke, high compression engine; it developed only 104 bhp, eight less than the Ambassador car, and churned out 195 lbs/ft of torque at 1,700 rpm.

Timken-Detroit furnished the front and rear axles, Ross the cam and twin lever steering gear, Lockheed the front brakes, and Timken the rears. Leaf springs went at all four corners.