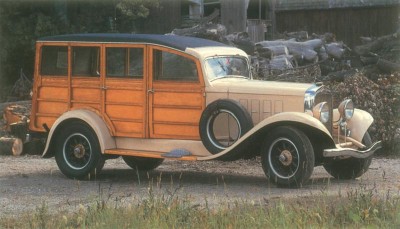 Before World War II, Reo was one of the best-known names in the commercial vehicle industry. This was due in large part to the 1915 introduction of the one-ton Speedwagon -- a name both memorable and apt.

The Speedwagon's original purpose was to provide more than the 10-15 mph gait common to trucks in the first two decades of the 20th century. The powerful four-cylinder engine, spiral bevel gears, and three-speed transmission did exactly that.

A six-cylinder Reo Speedwagon appeared in 1925, delivering even better performance. Despite producing such outstanding cars as the Flying Cloud and Royale, Reo suffered badly during the Depression.

By 1933 it was clear that Reo's future, if any, lay in commercial vehicles. In that year, Reo registered 3,042 trucks to 2,623 cars -- the first time it had sold more trucks than cars. Reo lost $2.5 million in the process, and realized that it could not continue to build cars at an annual volume of under 3,000.

The truck operation was shaky, too, but small-volume truckmakers seemed better able to survive.

The 1933 Reo Speedwagon Model BN is a prime example of Reo's commercial craftsmanship. According to Glenn Salada of the Domino's Classic Cars Museum in Ann Arbor, Michigan, "The BN was a specially built 1933-1934 model, several of which were panel delivery wagons. According to current authorities this rare Reo was built from a combination of component parts from the 1931-1933 Flying Cloud and Royale luxury cars and the 1933-1934 Speedwagon."

Power for the 1933 Reo Speedwagon Model BN came from a 230-cid Reo-built six called the "Gold Crown." Its 95 bhp was enough to make it one of the fastest trucks of its day. Fine styling and woody bodywork teamed up to make it among the most beautiful, too.

After 1936, Reo concentrated strictly on trucks under the Reo and Diamond-Reo nameplates.