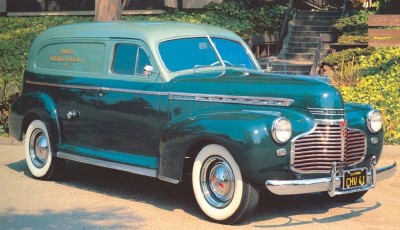 The1941 Chevrolet Series AG Sedan Delivery and Coupe Pickup combined passenger-car styling and comfort with the utility of a light-duty panel truck. The concept actually dated back to 1928, when the legendary Harley Earl first began designing Chevrolets.

In 1941, it was a perfect companion to the 1941 Chevy car line -- a beautiful redesign, which many felt made arch-rival Ford look like a plowhorse.

Like the passenger cars, the 1941 Chevrolet Sedan Delivery and its 1941 Chevrolet Coupe Pickup cousin (with a little pickup bed replacing the trunk) used a higher-compression 216.5-cubic-inch six, developing 90 horsepower.

Hydraulic brakes and an independent front suspension were just some of the features of the 1941 Chevrolet Series AG Sedan Delivery.

In short, a fine machine in 1940 had been made even better for 1941. It's worthwhile to compare this vehicle to the 1928 Chevrolet pickup. In that 13-year period, wheelbase had grown nine inches, length nearly 40 inches, weight rose 600 pounds, horsepower 55 -- with two cylinders added.

Yet the 1941 Chevrolet Series AG Sedan Delivery and pickup cost only about $60 more than their 1928 counterparts. (Of course, these Depression years weren't noted for inflation: the first-class postal rate, two cents in 1928, rose to a mere three cents in 1941.)

The bed of the 1941 Chevrolet Series AG Coupe Pickup could be replaced by a regular trunklid, converting the vehicle to a conventional coupe.

Also, its cargo area and cab floor have been carpeted. The 9918 examples built in 1941 were normally trimmed to more spartan Master DeLuxe specs.