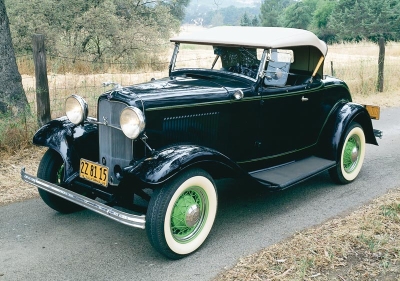 Ford created stiff competition in the post-depression era with models such as this 1932 Deluxe Ford roadster. See more pictures of Ford cars.

Founded in 1903, Ford Motor Company skyrocketed from obscurity to dominate the American auto industry in less than 12 years. The foundation of this unparalleled success was the world's first mass-produced car: the cheap, simple Model T, whose lovable quirkiness was matched only by that of its creator, company founder Henry Ford.

Henry's decision to abandon his treasured "Tin Lizzie" after 19 years and a staggering 15-million cars -- the last not very different from the first -- came almost too late, and his company lost a lot in money and goodwill during the long changeover to the belated new Model A.

Yet despite keen competition from an aggressive Chevrolet and newcomer Plymouth, the Model A was a success, almost perfectly timed for the Great Depression that began soon after its 1928 debut. Ford built more than 1.1 million cars for 1930 -- almost twice as many as Chevrolet and more than 14 times as many as Plymouth.

The 1930 Ford Model A received a number of changes that seem minor now but were major at the time. All models retained the "little Lincoln" styling crafted by Henry's artistic son Edsel (who was named Ford Motor Company president in 1919), but the fenders were lower and wider, the hoodline was higher, and stainless steel replaced nickel plate on the radiator and headlight shells.

Enhancing the lower look was a switch to balloon tires on smaller 19-inch wheels (replacing 21-inchers). Running changes made during the model year included a numerically higher steering ratio for less effort at the wheel, and standardization of vacuum-operated windshield wipers that had previously been an extra-cost accessory.

As before, the Model A spanned a wide range of body types: coupes, sport coupes, roadsters, and cabriolets with or without rumble seat; "Tudor" and "Fordor" sedans; a surprisingly dignified Town Sedan; and a wood-body station wagon. Most could be had with Standard or DeLuxe trim, the latter typically featuring brighter colors and spiffier interiors. Prices ranged from just $435 for the basic two-seat roadster to $660 for the Town Sedan.

There was also a very deluxe Town Car with canvas-­covered formal roof. Not many sold at $1200 -- a mere 96 for the model year. Arriving in June was a $625 DeLuxe two-door phaeton, a jaunty five-seater with standard left-sidemount spare, chrome trunk rack, leather upholstery, and lower steering wheel and windshield. Another new style, bowing in the autumn of 1930, was the Victoria coupe sporting a slanted windshield, soon to be commonplace throughout Detroit.

Little visible change occurred for 1931 save a painted section atop the front of the radiator shell, which made identification easy. Chevrolet was still pushing hard, and Ford yielded the top spot in 1931 model-year volume, though only by some 4100 cars. Ford wouldn't top Chevy again until 1934 despite scoring a coup with America's first low-priced V-8.­

Ford Motor Company led the American car industry from the get-go. To learn more about Ford's fascinating past and present, check out these additional sites.