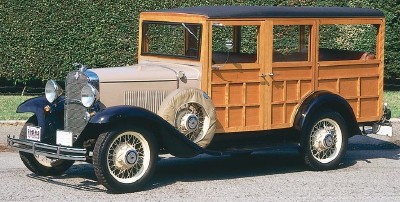 By the time this 1931 Chevrolet station wagon was introduced, Chevy was GM's largest volume division.

William C. Durant founded General Motors in 1908 but was ousted two years later, so he formed Chevrolet in 1911, intending to make it a powerful lever for regaining control. He did. By 1915, Chevrolet was a force to be reckoned with; by 1918 it was part of General Motors; by the mid-'20s, it was GM's largest volume division -- and has been ever since.

Early Chevys were largish, medium-price cars with six-cylinder and even V-8 power. The make's historic turn to the low-price field came with the four-cylinder "490" of 1915, named for its advertised list price. It was a big success, outflanking Ford's Model T with more attractive styling and more features. Its closely related successors were Chevy's mainstay products into the late '20s.

However, Chevy didn't pass Ford in production until 1927, the year Dearborn stopped building the aged T to retool for the Model A. Then, in 1929, Chevrolet introduced its new "Stovebolt Six," also known as the "Cast-Iron Wonder." The nicknames stemmed from the engine's cast-iron pistons and numerous 1/4-inch slotted bolts -- hardly esoteric, but wonderfully effective and reliable as Old Faithful.

The Stovebolt was engineered by Ormond E. Hunt from an earlier design by Henry M. Crane that had evolved into the 1926 Pontiac engine. By 1930, it produced an even 50 brake horsepower from 194 cubic inches. With various improvements, this solid, overhead-valve engine would remain Chevrolet's only powerpla­nt for nearly three decades.

It was with this engine in 1940 that a young Juan Manuel Fangio won the car-breaking 5900-mile round-trip road race between Buenos Aires, Argentina, and Lima, Peru, at an average speed of 53.6 mph. Fangio continued to race Chevrolets after World War II, but eventually switched to Grand Prix cars and became a legend as the first five-time world champion driver.

Created by the founder of General Motors, Chevrolet started as a competitor to GM and eventually became a part of the dominant automaker. For more info on the perennial Chevy, check out these sites.