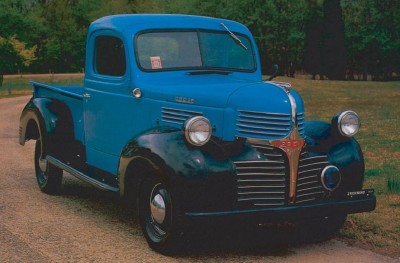 Though its looks dated to before the war, the 1946 Dodge WC pickup was solidly constructed and powerful for its day.

Of course, when Dodge restyled around then-fashionable art-deco principles in 1939, nobody thought the resulting trucks would have to last until 1948. But World War II intervened, and the body dies were hardly amortized when truck production cranked up again in late 1945.

This prewar styling generation was initially called the T-series. It spanned a wide range of bodies, wheelbases and payloads, from the half-ton TC pickup on a 116-inch wheelbase to three-ton tractor cabs.

These Dodge trucks enjoyed some popularity just before the war, and the last of them built in 1942, before Dodge turned to military production, were renamed the W-series.

When they resumed sales as the 1946 Dodge WC pickup, under their hood was a more powerful six, 95 horsepower, up from 75. Torque was a useful 172 lbs/ft. The body didn't look very different, but it was more colorful, however, available in black, green, orange, red, gray, and two shades of blue.

Postwar trucks also were more expensive -- but even at $925 the 1946 Dodge WC pickup was $120 cheaper than a comparable Ford, and some $300 below Dodge's least costly car.

This 1946 Dodge WC pickup is representative of the breed, and carries the optional under-dash heater.

Besides the pickup's "Express" bodywork, the W-series half-ton was available as a delivery truck with solid steel or open canvas-covered side panels, and in chassis, cab/chassis, and cowl/chassis versions.