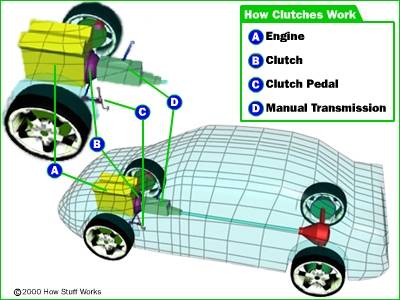 If you drive a manual transmission car, you may be surprised to find out that it has more than one clutch. And it turns out that folks with automatic transmission cars have clutches, too. In fact, there are clutches in many things you probably see or use every day: Many cordless drills have a clutch, chain saws have a centrifugal clutch and even some yo-yos have a clutch.

In this article, you'll learn why you need a clutch, how the clutch in your car works and find out some interesting, and perhaps surprising, places where clutches can be found.

Clutches are useful in devices that have two rotating shafts. In these devices, one of the shafts is typically driven by a motor or pulley, and the other shaft drives another device. In a drill, for instance, one shaft is driven by a motor and the other drives a drill chuck. The clutch connects the two shafts so that they can either be locked together and spin at the same speed, or be decoupled and spin at different speeds.

In a car, you need a clutch because the engine spins all the time, but the car's wheels do not. In order for­ a car to stop without killing the engine, the wheels need to be disconnected from the engine somehow. The clutch allows us to smoothly engage a spinning engine to a non-spinning transmission by controlling the slippage between them.

A clutch works because of friction between a clutch plate and a flywheel. We'll look at how these parts work together in the next section.

Exploded view of a clutch

When your foot is off the pedal, the springs push the pressure plate against the clutch disc, which in turn presses against the flywheel. This locks the engine to the transmission input shaft, causing them to spin at the same speed.

How a clutch engages and releases­

When the clutch pedal is pressed, a cable or hydraulic piston pushes on the release fork, which presses the throw-out bearing against the middle of the diaphragm spring. As the middle of the diaphragm spring is pushed in, a series of pins near the outside of the spring causes the spring to pull the pressure plate away from the clutch disc (see below). This releases the clutch from the spinning engine.

Note the springs in the clutch plate. These springs help to isolate the transmission from the shock of the clutch engaging.

This design usually works pretty well, but it does have a few drawbacks. We'll look at common clutch problems and other uses for clutches in the following sections.

From the 1950s to the 1970s, you could count on getting between 50,000 and 70,000 miles from your car's clutch. Clutches can now last for more than 80,000 miles if you use them gently and maintain them well. If not cared for, clutches can start to break down at 35,000 miles. Trucks that are consistently overloaded or that frequently tow heavy loads can also have problems with relatively new clutches.

Sometimes the problem is not with slipping, but with sticking. If your clutch won't release properly, it will continue to turn the input shaft. This can cause grinding, or completely prevent your car from going into gear. Some common reasons a clutch may stick are:

A "hard" clutch is also a common problem. All clutches require some amount of force to depress fully. If you have to press hard on the pedal, there may be something wrong. Sticking or binding in the pedal linkage, cable, cross shaft, or pivot ball are common causes. Sometimes a blockage or worn seals in the hydraulic system can also cause a hard clutch.

Another problem associated with clutches is a worn throw-out bearing, sometimes called a clutch release bearing. This bearing applies force to the fingers of the spinning pressure plate to release the clutch. If you hear a rumbling sound when the clutch engages, you might have a problem with the throw-out.

In the next section, we'll examine some different types of clutches and how they are used.

If you don't hear any noise during these four steps, then your problem is probably not the clutch. If you hear the noise at idle and it goes away when the clutch is pressed, it may be an issue in the contact point between the fork and pivot ball. 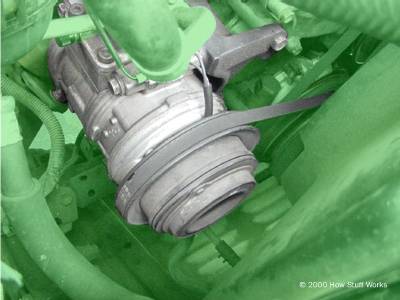 There are many other types of clutches in your car and in your garage.

An automatic transmission contains several clutches. These clutches engage and disengage various sets of planetary gears. Each clutch is put into motion using pressurized hydraulic fluid. When the pressure drops, springs cause the clutch to release. Evenly spaced ridges, called splines, line the inside and outside of the clutch to lock into the gears and the clutch housing. You can read more about these clutches in How Automatic Transmissions Work.

Most cars that have an engine-driven cooling fan have a thermostatically controlled viscous clutch -- the temperature of the fluid actually drives the clutch. This clutch is positioned at the hub of the fan, in the airflow coming through the radiator. This type of clutch is a lot like the viscous coupling sometimes found in all-wheel drive cars. The fluid in the clutch gets thicker as it heats up, causing the fan to spin faster to catch up with the engine rotation. When the car is cold, the fluid in the clutch remains cold and the fan spins slowly, allowing the engine to quickly warm up to its proper operating temperature.

Many cars have limited slip differentials or viscous couplings, both of which use clutches to help increase traction. When your car turns, one wheel spins faster than the other, which makes the car hard to handle. The slip differential makes up for that with the help of its clutch. When one wheel spins faster than the others, the clutch engages to slow it down and match the other three. Driving over puddles of water or patches of ice can also spin your wheels. You can learn more about differentials and viscous couplings in How Differentials Work.

Gas-powered chain saws and weed eaters have centrifugal clutches, so that the chains or strings can stop spinning without you having to turn off the engine. These clutches work automatically through the use of centrifugal force. The input is connected to the engine crankshaft. The output can drive a chain, belt or shaft. As the rotations per minute increase, weighted arms swing out and force the clutch to engage. Centrifugal clutches are also often found in lawn mowers, go-karts, mopeds and mini-bikes. Even some yo-yos are manufactured with centrifugal clutches.

Clutches are valuable and necessary to a number of applications. For more information on clutches and related topics, check out the links on the following page.