How long do crankshaft bearings last? 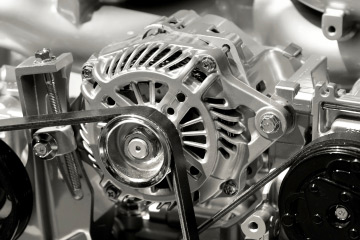 Image Gallery: Car Engines It's tough to tell when your car's crankshaft bearings will wear out. See pictures of car engines.
©iStockphoto.com/Snehit Design

In some cases, car maintenance is straightforward and simple. Just change the oil and belts according to the manufacturer's recommendations, listen for weird noises and keep an eye on the instrument panel for warning lights. A lot of parts give us ample warning before they give up the good fight. Unfortunately, we enjoy no such insight when it comes to crankshaft bearings.

Crankshaft bearings support the crankshaft (one of the components that makes the engine rotate), which sounds simple enough. However, crankshaft bearings also have to reduce friction between the rotating crankshaft and stationary engine block, and that's how they sustain most of the damage over their lifespan [source: Kaufman].

They usually wear out because of other engine functions, not those of the bearing itself, which makes it impossible to predict how long they'll last or when they'll fail. Under ideal conditions, they'd last indefinitely. However, they're usually made of copper and lead compounds, which are subject to a variety of weaknesses. The most important factor is lubrication. As long as there's a steady flow of clean oil, the bearings will generally keep moving along fine. If the oil's dirty, though, or if the supply is cut off, that's when the problems start.

Crankshaft bearings can wear out due to:

These are all common conditions in a car's engine and are sometimes signs of other problems. There aren't many external indicators of crankshaft bearing problems, but if you suspect the oil supply might be compromised, there's a good chance there might be premature wear inside. If your crankshaft is losing oil from a faulty seal, you'll see a puddle in your parking spot; when the car's running, you'll smell oil burning as it drips on the hot manifold. Be careful, because it only gets worse from there [source: Allen].

So what happens when your crankshaft bearings finally yield? If your mechanic tells you there's "catastrophic engine failure," he's not embellishing for dramatic effect -- it's the actual term used. When crankshaft bearings fail, the increase in heat, pressure and metal-to-metal contact can cause distortion of the crankshaft and connecting rods, which in turn will cause the engine to seize. It'll be necessary to completely disassemble and reassemble your engine (if you decide to keep the car, that is).

Though the bearings don't have a recommended replacement interval, replacing them is a standard part of an engine rebuild service. Putting dirty, scratched, corroded bearings back in a newly rebuilt engine makes little sense; the old parts will quickly damage the fresh parts. If you do end up with new crankshaft bearings, they might last a little longer this time around. Some original equipment manufacturers (the companies that supply car manufacturers with the parts they need) are switching to aluminum bearings instead of the traditional copper/lead type. Aluminum is less expensive and more durable, and it has better temperature tolerance [source: AA1Car].

Whether your car's recently suffered catastrophic engine failure, or if you're hoping for a few thousand more miles out of your leaky bottom end, keep reading for more information about engine operation and maintenance.