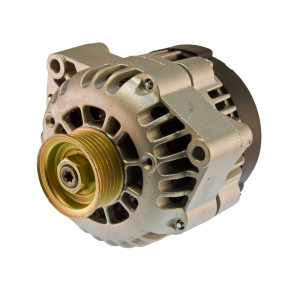 Do you know long can you expect your car's alternator to last?
©iStockphoto.com/Ules Barnwell

Just think of this scenario: You open your car door, step inside and sit down. You put your seat belt on, adjust your rearview mirror and then put the key in the ignition and give it a turn. Instead of the motor roaring to life, all you hear is a click-click sound. Nothing happens, no matter how many times you try to turn the key.

Odds are, most of us will face this kind of situation at least once in our lives. Actually, it could mean a number of different things, including engine troubles or a dead battery. However, it could also mean your alternator is nearing the end of its life and it is time to replace it. The alternator is an important car part that recharges the battery using power from the engine. It also provides power to the electrical components. It's about the size of a coconut and consists of a rotor, stator and housing. Electrical coils mounted on the rotor -- which is spun by the engine's serpentine belt -- move past stationary coils on the stator, and that creates electrical flow [source: Basic Car Audio Electronics].

This auto part produces electricity that flows into the battery, which is then used to run the electrical components in the car. An alternator produces alternating current (AC) -- as opposed to the generator on older vehicles, which produced direct current (DC) -- and that's where it gets its name. Cars with an alternator use a diode pack to convert the AC power to DC power, which is what the car's electrical system components require to operate.

The alternator keeps the battery from losing its charge and eventually dying, because when the battery dies, all the electrical features included on your vehicle go along with it.

We ask a lot from our auto parts, especially our vehicle's electrical system. It wasn't that long ago when an alternator only had to power headlights, the radio and a few other accessories. But now, our cars come complete with GPS navigation systems, electric seat heaters and even DVD players. It's easy to see how alternators and batteries have to handle a much heavier load these days.

When your alternator goes out, you may not be able to start your engine, or switch on electrical accessories like the radio or your GPS unit and you may even notice that the gauges are beginning to fail while you're driving. If your alternator is failing, there's a good chance that you'll need to replace it.

But how long can an alternator last from the time when the car is new? What factors contribute to this auto part's longevity? Luckily, there are many ways to learn more about this problem and other car part information. In this article, we'll explore the factors behind an alternator's lifespan, and learn more about how to keep your car's electrical system working properly. 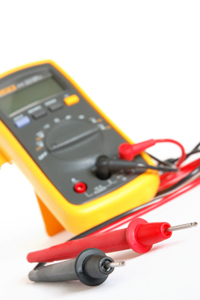 A voltmeter is just one way to determine if your car's alternator is in proper working order.
©iStockphoto.com/Stefano Tiraboschi

No one looks forward to being stranded on the side of the road, whether it's thanks to the alternator or anything else that breaks on our cars. Luckily, there are preventative measures we can take to make sure the electrical system won't fail us when we need it most.

There are several ways to test the health of your car's alternator. One way is to use a voltmeter, a device used to measure electrical output. A voltmeter can be found at almost any auto parts or electronics store. Start the car, make sure all accessories are turned off and get the engine at a healthy idle. Select the DC scale on the voltmeter, connect it to the battery terminals and look at the reading on the device.

The voltage should read around 14 volts. Next, start adding electrical devices like headlights, heater and radio -- if at any time the voltage drops lower than 12 volts, then your alternator isn't doing what it should be. Check to make sure it's the same voltage at the alternator terminal. If it isn't, your car's battery may be the problem, not the alternator [source: Hewitt].

If you think the problem is the battery and not another car part, there are a few things you can try before running out and buying a new one. Make sure you disconnect the battery from the vehicle, negative terminal first and then positive. You don't want to unintentionally zap yourself! Try cleaning the battery connections with baking soda and water -- if the terminals are dirty, electricity won't flow properly.

You can also replace the terminal clamps, which can erode to the point where they don't provide contact anymore. There may be soldering involved with the replacement clamps, however, so this job requires a few more tools and a little more time than you may be willing to put in [source: Allen].

If these efforts don't work and the battery isn't the issue, it may be time to replace the alternator altogether. In the next section, we'll discuss the auto part information necessary for the job, and how doing it yourself is easier than you might think.

The individual auto parts within the alternator like the rotor, diode pack and stator typically aren't serviceable. This means that when one of the car parts go bad, it's best to replace the entire alternator. If you have the tools and some knowledge of how to repair a vehicle, you can save some of the labor costs by changing out the alternator yourself. Just remember that it's always a good idea to consult your vehicle's service manual for the right auto part information.

To begin, make sure the vehicle is parked in a flat, well-lit area and that the engine has had proper time to cool down. Next, disconnect the battery to minimize the risk of shocking yourself. Locate the alternator in your engine bay, usually a silver, rounded device with a fan visible behind the belt pulley. It's bolted to a bracket attached to the engine, so you may need to use two socket wrenches to get it loose. If the hardware is corroded, it may be difficult to remove the bolts.

Alternators can be driven by two types of belts connected to the crankshaft -- a V-belt or a serpentine belt. The former fell out of fashion after the late 1980s and most new cars use a serpentine belt. You'll need to loosen the belt tensioner so there's some slack in the belt, then slip the belt off the pulley. It's not a bad idea to replace the belt altogether while you're at it. Just remember to contact the local auto parts store with you car part information to make sure they have the right part in stock for you.

Now, remove the electrical connections behind the alternator, making sure you remember where they were located. You can then remove the old alternator and set it aside. Now, if you're replacing the belt, do that before you do anything else. Place the new alternator in the correct position and secure the belt, making it properly tight -- then you can begin to tighten the bolts that hold the alternator in place. If you're working alone, it may help to use vice grips to hold the alternator right where you want it [source: Mobil Oil USA].

Now, replace the electrical connections, being careful to put them in the proper place. Reconnect the battery and start the engine. Make sure you don't get any engine or battery warning lights on your dashboard and that you don't hear any unusual noises, either. If you do it right, you'll be rewarded with car part longevity -- your new alternator should perform just as intended.

For more information about alternators, auto part longevity and other related topics, follow the links on the next page.