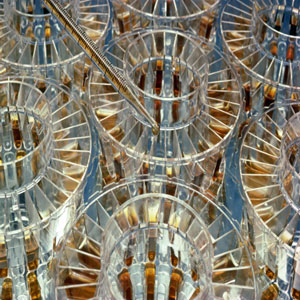 Before we can tackle what's new in synthetic motor oil technology, w­e should first make sure that we know what synthetic oils are. Mineral or conventional motor oils come from the ground, like the stuff that bubbles up in oil fields from Texas to Saudi Arabia. On the other hand, synthetic oils are man-made. Each company has a proprietary process for creating these oils that they're not keen to disclose.

If there were two puddles of clean engine oil on the floor, one puddle of mineral oil and one puddle of synthetic, it would be almost impossible to tell them apart. As ExxonMobil technical advisor Kevin Chinn quipped during a phone interview, "You'd slip on both of them." If two vehicles at 10,000 miles (16,093 kilometers) past their last oil change were drained, though, the differences between the vehicle using mineral motor oil and the one using synthetic oil would be apparent: The mineral oil would be noticeably thicker.

­Synthetic oils have been around for a while; Amoco sold one as early as 1929. During World War II, the Germans advanced synthetic oil technology when Allied forces strangled the country's oil supply. In the 1950s and 1960s, synthetic oil took off to meet the high-performance needs of fighter jets. Then, just as the fuel crisis of the 1970s took hold, Mobil1 synthetic oils that promised to increase fuel economy hit the passenger car market.

Despite the boost provided by the last fuel crisis, it took some time for synthetic motor oils to gain traction in the automotive market. The turning point came when auto manufacturers started to understand the benefits of synthetics -- such as fewer emissions and longer stretches between oil changes -- and recommended their use in newly built cars.

Next we'll look at how synthetics differ from mineral oils, and learn the meaning behind some of the terms used by motor oil manufacturers.

The Science of Synthetic Oils

The main difference between synthetic motor oil and conventional motor oil is found in their molecular structure. In a mineral oil, the molecules come from organic, natural materials, and as we know, nature isn't always consistent. There can sometimes be a few oddball molecules in mineral oils. Synthetic oils, on the other hand, were created by scientists in a lab. The molecules are uniform, and they line up like good soldiers inside of your engine.

There are three basic parts to synthetic motor oil:

There are a few terms that come up with synthetic oils that you should know:

In all of these tests, synthetic oils perform better than their mineral oil counterparts, thanks to those uniform molecules. Sure, lab testing's great, but how do these oils perform in the real world? Let's explore the advantages of synthetic oil on the next page.

We mentioned that synthetic oils took off during World War II, when Germany was low on oil. This was due in part to the Fischer-Tropsch process, which turns coal -- a resource Germany had in abundance - -into synthetic fuel or oil. They used it most often for much-needed fuel, but the work of Franz Fischer and Hanz Tropsch moved the process of creating synthetic oils into the future.

The best synthetic oils are making only small advances these days, while the lower rungs of the motor oil ladder are improving quickly. The biggest differences are in the additives in synthetic oils. As an example, specialty motor oil company Royal Purple has found a way to increase the film strength of synthetic oil, which protects where metal contacts metal inside the engine.

Some of the advantages of synthetics include:

There aren't many disadvantages to using synthetic oils, but they do exist. Synthetic oils cost around 6 to 10 times the price of conventional motor oils. To make matters worse, synthetic oils will clean out the deposits that may be holding a weak seal together. This could lead to an engine oil leak that may cause myriad safety problems and cost you a lot of money to fix as well.

While we're at it, we should bust a few synthetic oil myths:

Read on to learn about the future of the synthetic motor oil market.

Among other harsh tests, Mobil1 synthetic oil is tested in what some drivers may consider the worst possible scenario: Las Vegas taxi cabs. Why Las Vegas? The summer days are extremely hot, the winter nights are very cold, the driving is nothing but stops and starts on the often gridlocked Las Vegas Strip, and the cabbies put about 200 miles (321.9 kilometers) on the odometer every day. If a synthetic can stand up to that kind of abuse, Mobil engineers figure, it can probably perform well in an average car.

The Future of Synthetic Oils 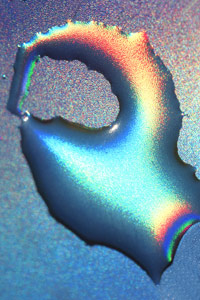 As synthetic oil technology continues to evolve, this tiny drop of oil will be able to do a whole lot more.
John Foxx/­Getty Images

In past years, the goal of the automotive industry was to build bigger, faster and more powerful vehicles. That's changing in the twenty-first century, as the concern of consumers, governments, and industries is moving to increased efficiency and reduced emissions, especially in the U.S., Europe, and Japan.

However, make no mistake: Horsepower is still important. Modern engines are capable of putting out massive power, and the numbers are increasing (the Bugatti Veyron, for example, has over 1000 hp). But the question is becoming one of power density, or the need to build smaller, more efficient engines capable of increased power. That's one of the roles of lubricants going forward. High-quality synthetic oil can enable manufacturers to decrease the size of the oil sump required for the engine, run the engine at hotter temperatures and use turbochargers as well.

As cars move toward using alternative fuels, synthetic oil makers are shifting their scope. Electric vehicles, for example, might not need motor oil, but they come with lubricated bearings and any gearboxes would also need to be lubed. Even the power plant that generates the electricity that charges the vehicles will need industrial-grade synthetic oils for the moving parts of its machinery.

As the government mandates emissions improvements, oil manufacturers will have make significant investments to implement the necessary changes -- to the tune of tens of millions of dollars in research and testing. However, even as the future of the automotive industry remains a bit of a mystery, the future of synthetic oils seems assured.