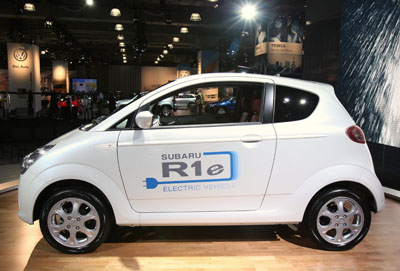 Image Gallery: Electric Cars The Subaru R1e electric car can be charged overnight on household current. It has a range of 50 miles and a top speed of 62 miles per hour. See more electric car pictures.
STAN HONDA/AFP/Getty Images

Electric cars are something that show up in the news all the time. There are several reasons for the continuing interest in these vehicles:

An electric car is a car powered by an electric motor rather than a gasoline engine.

From the outside, you would probably have no idea that a car is electric. In most cases, electric cars are created by converting a gasoline-powered car, and in that case it is impossible to tell. When you drive an electric car, often the only thing that clues you in to its true nature is the fact that it is nearly silent.

Under the hood, there are a lot of differences between gasoline and electric cars:

A gasoline engine, with its fuel lines, exhaust pipes, coolant hoses and intake manifold, tends to look like a plumbing project. An electric car is definitely a wiring project.

In o­rder to get a feeling for how electric cars work in general, let's start by looking at a typical electric car to see how it comes together.