How the GM Sunraycer Worked 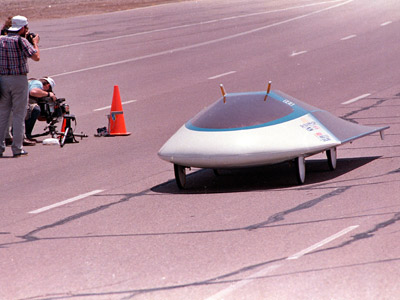 ­In 1986­, at a time when gas was still less than $1 a gallon (about 26.3 cents per liter), General Motors CEO Roger Smith contracted Paul MacCready and his com­pany AeroVironment, Inc. to build a solar-power­ed car in less than one year's time. What was the purpose? Smith wanted GM to compete in the inaugural World Solar Challenge, a sun-powered 1,864-mile (3,000-kilometer) trek across the continent of Australia.

­I­n 1986, solar power was nothing new. In the wake of the energy crisis of the 1970s, solar energy research was a highly specialized field and a growing industry. For MacCready though, building land vehicles was something new. An already established innovator of alternative ­energy, in particular solar power, MacCready's team was renowned for its use of exotic materials in building lightweight, experimental aircraft. But building a road-going vehicle able to withstand the ruthless heat and conditions of Australia's outback proved a new challenge.

Up next, we'll learn about the World Solar Challenge and the inception of the concept.

The idea to enter the World Solar Challenge originally came from GM's Australian division. Once Roger Smith heard about the concept he promptly contacted AeroVironment to gauge whether it was feasible to build a vehicle that would be competitive in less than a year. After conducting an initial study, Paul MacCready was confident his team could pull it off.

MacCready along with Hughes Electronics executed the design of the Sunraycer and took it for a test spin in Arizona in early October, 1987. It performed admirably, completing four laps of a 5-mile (8 kilometer) course with a best average speed of 35.227 mph (56.692 kilometers per hour), setting a new land speed record for a solar-powered vehicle.

The World Solar Challenge starts at Darwin and ends in Adelaide, Australia, and encompasses public roadways throughout. As a result, drivers in the competition must adhere to the same rules as every other driver on the road. The race runs from 8 a.m. until 5 p.m. at which time the drivers and teams camp until the race begins the next day. From 1987 until 1999, the race convened once every three years. Since 2001, the race has been held every two years.

During that inaugural race in Australia, the GM team took the pole position after it recorded the fastest time in qualifying. At the end of the 1,864-mile (3,000-kilometer) race, and taking into account that a race day is only 9 hours long, GM's Sunraycer was more than two days ahead of its next competitor; an entry called the Sunchaser, built by Ford Motor Company. Averaging 41.5 mph (66.8 kilometers per hour), the Sunraycer covered the nearly 2,000-mile (3,218.7-kilometer) journey in 44 hours and 54 minutes. The Ford Sunchaser finished the race in 67 hours and 32 minutes. The Sunraycer's reliability played a major role in its victory.

While it looks very simple on the outside, the engineering behind its design is nothing short of purposeful. Let's move on to the inner workings of the Sunraycer in the next section.

In 1980, Paul MacCready developed the first solar-powered aircraft, the Gossamer Penguin. A year later, MacCready pushed the limits even further with the Solar Challenger, a larger and more rigid solar-powered aircraft. Powered by only the sun's rays, the Solar Challenger, at a cruising altitude of 11,000 feet (3,352.8 meters) made a successful 163-mile (262.3-kilometer) trip from Paris, across the English Channel, landing in England. 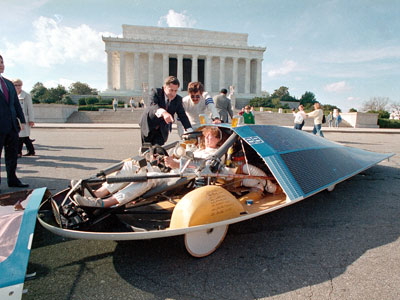 It goes without saying -- the Sunraycer is a rather peculiar looking vehicle. Resembling a cross between a squashed bullet and a cockroach, the Sunraycer is long and sleek. In order for the car to be able to run on solar energy, more than 7,000 solar cells are installed on the skin of the vehicle covering an area of about 90 square feet (8.4 square meters). The solar cells charge a large silver-cell battery pack which is installed behind the driver's compartment. The driver sits almost as if driving a Formula One or Indy Car and the entire vehicle (minus the driver) weighed less than 400 pounds (181.4 kilograms).

Along with its large battery pack, the Sunraycer contains a smaller silver-zinc battery used primarily for accelerating past slow traffic and up hills. Both batteries power a lightweight direct-drive electric motor that powers the rear wheels. At 8.1 pounds (3.7 kilograms), the electric motor produces just two horsepower.

The Sunraycer's slung-back design eliminates as much as drag as engineers could ca­lculate. At a paltry .125 drag coefficient (Cd), the Sunraycer was more aerodynamic than a McLaren F1 at .32 Cd. In fact, most production cars rarely dip below .30 Cd. The GM (Impact) EV-1, which we'll learn about in the next section, had a very low drag coefficient, too.

The solar cells on the Sunraycer are similar to those found on satellites. MacCready pulled on his aerospace engineering background to design a comfortable cockpit for the driver. Because of the excessive heat in the Australian Outback and the lack of climate control devices and outside ventilation, the sealed cockpit had to be well-insulated. Engineers solved the heat issue by applying a thin gold film over the cockpit. The film blocked 90 percent of visible light and 98 percent of the Sun's infrared radiation.

In the next section you'll learn how GM went from solar-power pioneer to the brink of bankruptcy. Believe it or not, the Sunraycer played a major role. Read on to find out.

The Sunraycer and the EV-1

The Sunraycer is widely vi­ewed as the predecessor prototype to the failed EV-1 program. In 1987, it's safe to say that solar-powered electric vehicles for mass transportation were considered gimmicky and not many people had alternate fuel on their minds. Fast forward 22 years to the economic struggles of 2009 and the inevitability of peak oil prices and it becomes obvious the U.S. auto manufacturers could have benefited from advancing the exploration of alternate fuel vehicles such as the EV-1. Nevertheless, the blame doesn't fall squarely on the shoulders of GM.

The EV-1 ran on the power of lead-acid batteries, similar to the battery found under the hood of your car, and they didn't have much range. GM stated the EV-1 had a range of around 120 miles (193.1 kilometers) which was later bumped to 160 miles (257.5 kilometers) with nickel-metal hydride batteries, but many drivers claimed the actual range was far less, especially when driven with accessories such as the air conditioner, heater or headlights on.

Compounding the lack of range, recharge stations were not readily available. The EV-1 could recharge in about two hours under ideal conditions. But perhaps the biggest problem was the cost. For about $38,000, drivers could lease the EV-1 and have the vehicle serviced through the company's Saturn dealerships. But herein lays the major snafu with the EV-1 program: Considering the EV-1 cost GM roughly $80,000 per vehicle, the Detroit manufacturer bled money with each sale [source: Bensinger].

GM sought-out and destroyed nearly all of the EV-1s toward the end of the program as documented in the film "Who Killed the Electric Car?" In the end, GM lost somewhere in the neighborhood of $2 billion on the EV-1 program. Who would have thought one vehicle program could cost a company so much?

While the EV-1 may have failed financially, the Sunraycer's legacy lives on. Find out what the automotive industry learned and what's in store for GM's electric vehicle program in the next section.

In October 2008, a Canadian man reportedly sold a 1998 GM EV-1 for $465,000 Canadian dollars or roughly $360,000 U.S. dollars. The car was originally purchased by the seller's grandfather and had been stored in a garage for four years leading up to the sale. Even though the car had 88,545 miles (142,499.4 kilometers) on the odometer, it fetched nearly a half a million dollars. GM destroyed nearly every EV-1, and the ones that have survived are either in museums or university research centers [source: Richard].

Legacy of the GM Sunraycer 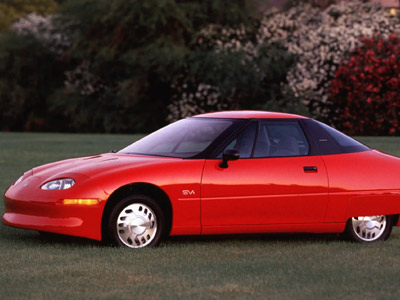 General Motors capitalized on its solar-powered success and spearheaded efforts to introduce the technology in the wake of the Sunraycer's triumph in 1987. In 1990, 32 college teams designed and raced in the first GM Sunrayce USA; a 1,800-mile (2,896.8-kilometer) race from Florida to Michigan, with the top three finishing teams earning a trip to the World Solar Challenge in Australia.

After the Sunrayce in 1990, GM developed the Impact -- the vehicle that would hit the production line as the EV-1. The Impact was to be an electric sports car that would meet the rigorous specifications of the Zero-emissions Vehicle (ZEV) mandate that stated at least 2 percent of all the vehicles sold in California by the major auto manufacturers would emit no emissions.

The EV-1 proved to be the next logical progression and it was GMs answer to the ZEV mandate. It may have worked had the company executed the program better. Current CEO Rick Wagoner called the termination of the EV-1 the biggest mistake of his tenure and regrets not refocusing the company's efforts on hybrid technology.

In the years following the Sunraycer and EV-1, fuel prices skyrocketed and U.S. consumers changed their tastes from large SUVs and trucks to smaller, gas-friendly sedans or compact cars. As a result, GM is in danger of permanently shutting its doors. The Chevy Volt, an extended-range electric vehicle GM has been working on for several years, may be the answer to the company's decline in the market. The Volt could have been the car that saved the beloved bowtie brand had GM transferred its electric vehicle technology from the EV-1 when it had momentum. Instead, GM found itself years behind fuel-efficient manufacturers such as Honda and Toyota. Now, as the federal government pumps money into the struggling auto industry, the Volt may be GM's last-ditch effort to stave off the permanent foreclosure.

Today, the GM Sunraycer sits in the Smithsonian Museum of American History in Washington, D.C., a testament to the innovative minds of the times. The Sunraycer proved solar energy could be a viable fuel alternative. Only time will tell if the path the Sunraycer laid over the Outback of Australia more than two decades ago will be the swan song of a proud American company or the turning point of a new generation.

For more information on GM's Sunraycer, solar power and other related topics, follow the links on the next page.

Top 10 Speeds Clocked on the Autobahn
Why the Ford Edsel Failed
Rod Riguez: Profile of a Hot Rod