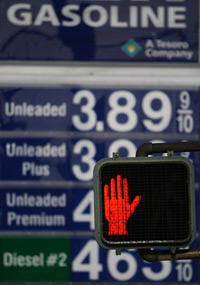 Photo by Justin Sullivan/Getty Images
High gas prices can make you stop and think about your commute. See hybrid car pictures to see models that save you money.

In May 2008, average gas prices in the United States approached, and in some places passed, $4.00 a gallon, shattering records. But this was nothing new to American consumers. May was a month of records that broke one after another, and that came on the heels of months of rising prices. And then the cycle continued, with prices eventually falling and then inching toward the $4.00 mark again in 2011.

Gasoline is the bloodline that keeps America moving, and tracking gas prices can feel like a roller coaster ride. They're down a little one month, up the next, and then they shoot up more than 50 percent in a year. Plus, they're different depending on where you look. Other countries -- and even other states and cities -- can have very different gas prices from your local Gas-N-Go. To the average person, it probably seems as though there's little rhyme or reason to how gas prices are determined. In this article, we will look at the forces that impact the price of gas at the pump, and we'll find out where your gas money actually goes.

Americans have an insatiable thirst for gasoline. Just look at the amount of traffic on roads and highways, and you'll see that a severe gas shortage would practically cripple the United States. Americans drive nearly 3 trillion miles per year, according to the Motor and Equipment Manufacturer's Association [source: MEMA]. That's about 820 trips from the sun to Pluto and back.

The United States consumes about 20 million barrels of oil products per day (bbl/d), according to the Department of Energy [source: DOE]. Of that, almost half is used for motor gasoline. The rest is used for distillate fuel oil, jet fuel, residual fuel and other oils. Each barrel of oil contains 42 gallons (159 L), which yields 19 to 20 gallons (75 L) of gasoline. So, in the United States, something like 178 million gallons of gasoline is consumed every day.

Typically, the demand for gas spikes during the summer, when lots of people go on vacation. Holidays like Memorial Day and the Fourth of July create logjams of tourist traffic during the summer. This high demand usually translates into higher gasoline prices. Cleaner-burning summer-grade fuels, which are more expensive to produce, can increase the price as well, but prices don't always go up in summer. For instance, while gas prices soared 31 cents in April and early May of 2001, reaching $1.71 per gallon (which seems inexpensive compared to today's prices), prices actually declined during the 2001 summer.

In 2004, prices continued to rise past the end of the summer travel season for a variety of reasons, including several hurricanes and an increase in the price of crude oil. And in 2005, Hurricane Katrina (along with a sizable increase in crude oil prices) pushed prices to $3.07 per gallon on September 5. Prices settled down somewhat in November and December of 2005. But now the numbers are among the highest they've ever been, only recently dipping back below the $4.00 mark after a month of average prices at $4.06 for a gallon of regular gas in July 2008 [source: EPA]. It seems the record high prices encouraged people to drive less, which in turn drove down demand and subsequently, prices. As prices rose again in 2011, President Barack Obama announced the formation of a task force to examine oil markets [source: Pace].

Price increases generally occur when the world crude-oil market tightens and lowers inventories. We will discuss who controls the crude-oil market later. Also, growing demand can sometimes outpace refinery capacity. In the spring, refineries perform maintenance, which can place a pinch on the gasoline market. By the end of May, refineries are usually back to full capacity.

In the next section, we'll look at where the money goes when you pay for gas.