How the Venturi Eclectic Works 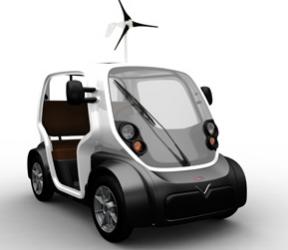 At first blush, the Venturi Eclectic automobile sounds like the subject of a techno-thriller: A car that can power up with the limitless energy of the sun and wind -- a car that has no use for gasoline or diesel fuel. You can imagine governments, spies, superheroes and all sorts of nefarious characters trying to get their hands on one.

You can also imagine all sorts of people trying to keep it off the market. Would the major automakers or the Organization of Petroleum Exporting Countries (OPEC) ever allow mass production of such a vehicle? After all, a car that dispenses with conventional combustion-powered technology would need no petroleum-based fuel; it would require far less maintenance and would need to be replaced far less often. A car like this would be nothing less than revolutionary, right?

Conventional automakers can rest easy for the moment: It turns out that the Eclectic, made by the small Monaco-based company Venturi, poses little threat to the automotive and energy powers that be -- at present. However, this unique vehicle offers an intriguing glimpse into the future of eco-friendly automobiles.

­The Venturi Eclectic sports an appearance that's as quirky as its method of propulsion. Its boxy body sits atop four small, thin wheels that evoke the carriage-like autos of the early 20th century. A roof covered with photovoltaic cells harnesses the sun's energy. And as if this car isn't green enough, Eclectic owners can also attach a removable wind turbine to collect auxiliary energy supplied by any available and adequate breeze.

This article will examine the battery-powered Eclectic and its bold claim that it's "solar-electric autonomous." Is it? In reality, the sun doesn't always shine, and the wind doesn't always blow. Since these renewable resources aren't always available or reliable, the Eclectic needs to be plugged in for electric power.

The Venturi follows in a long tradition of vehicles that have used solar power to charge on-board batteries. However, it appears to be the first mass-produced vehicle to do so, as opposed to merely being a prototype or concept car. Like many vehicles that run on the sun's power, the Eclectic shows certain limitations in comparison to petroleum-powered cars: It reaches a top speed of only 30 mph (48.3 kilometers per hour) and it's limited to a range of only 30 miles (48.3 kilometers).

Nonetheless, considering the attention paid to the effects of auto emissions on climate change, environmentalists and others remain positively charged about the Eclectic and cars like it. On the next page, we'll get inside the heads of the Eclectic's designers.

Venturi, the Monegasque company that makes the Eclectic, makes no bones about its philosophy behind building the car. Geopolitical tensions and environmental concerns drive the need to build more efficient automobiles, according to the company. A statement on the Venturi Web site describing the Eclectic's purpose explains further:

"Soaring gas prices, economic crises, wars, omnipresent pollution, irreversible changes in the climate… Our world is going through a period when the stakes in terms of energy form the very basis for worldwide chaos. While admitting that no solution for energy production can be perfect, we must become fully aware of the imperative need to limit our own personal consumption of energy. Eclectic, the first solar and electric autonomous car in the history of the automobile, opens up a new era in the field of mobility: reserved for daily driving in urban areas" [source: Venturi].

As for the car's appearance, the Eclectic is open, airy and somewhat retro, with its square-like contours and doorless design. The doors are optional, but certain cues, like the Eclectic's solar panel roof and three-seat passenger area, hint toward the car's futuristic bent.

The driver and passengers will find themselves adjusting to a seating configuration unique to current standard production vehicles: The driver sits front and center in the Eclectic's cabin, while the two passengers sit side-by-side in the rear.

We'll take a look at the technical aspects of the Venturi Eclectic on the next page.

Venturi plans to market the Eclectic towards consumers who want to actively reduce their carbon footprint. Those looking to leave other drivers in a cloud of exhaust and tire smoke at traffic lights need not apply. Instead, Venturi sees the drivers of its car and others like it plugging into the power grid when it's not in use and actually contributing to the energy supply. Venturi and other green car manufacturers believe that if enough electrically-driven cars use the grid to power up, we could solve many of our electrical supply problems without having to build a plethora of new power plants [source: Boschert].

For consumers looking for options on the Eclectic, Venturi offers a 400-watt wind turbine, with a mast to collect wind energy while you're away from the car. It also includes the following on its options list: A WiFi kit for Internet access, cloth-covered wooden seats, fabric doors, a trunk with a lock, 220-volt and 12-volt power receptacles and custom printing for the fabric doors.

We've learned a lot about this car's bells and whistles, but how does it move? The Eclectic has two forward and two reverse "gears" that are driven by its electric motor. That motor then gets electricity from a pack of Nickel Metal Hydride (NiMH) batteries that can be recharged from a standard European electrical outlet. No fancy or hard-to-find charging station is required.

Alternatively, drivers can park in a sunny location and allow the batteries to recharge with solar energy that's converted to electricity by Eclectic's roof panels. Finally, as we mentioned earlier, drivers can set up a small, portable wind turbine to collect wind energy. The Eclectic's wind turbine includes a fan blade assembly, along with the housing and electrical generator to convert the kinetic energy of wind into electrical energy.

Go to the next page for information on the Venturi Eclectic's pricing, availability and its prospects in the marketplace. 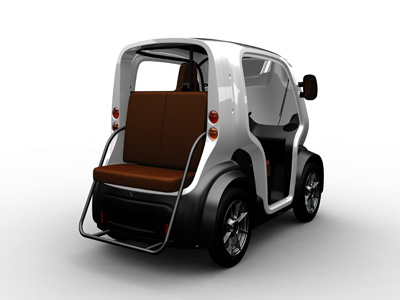 Green car enthusiasts might have a tough time buying an Eclectic.
Courtesy of Venturi

For certain green car enthusiasts, the Eclectic's arrival will likely be followed by two questions: "How can I get one, and how much will I pay for it?"

The chances of owning an original Eclectic, while not nil, are still quite slim. The initial batch of 200 has already sold out. However, Venturi said that response was so great that it decided to put a more consumer-friendly version of the Eclectic into production. This more compact Eclectic appears closer to what a conventional car looks like, though the family resemblance to the original Eclectic concept remains apparent. Think of the Smart fortwo ultra-compact vehicle, but with three seats and solar panels on the roof.

The price of this newer version of the Eclectic is slated to start at around 15,000 euros, or roughly $19,350 dollars. Venturi says production will begin in October 2009, in a new assembly plant near the French town of Sablé-sur-Sarthe. Venturi projected an initial run of 3,000 Eclectics a year; however, that number could change, considering the softening in Europe's automotive market caused by the global economic downturn.

It's anyone's guess how customers will respond if oil prices and the global economy don't pick up soon, but Venturi says it plans to target several existing markets:

Excitement for the Eclectic has run quite high. In 2007, Time magazine named the Eclectic one of the year's best inventions, a list that also included the omnipresent iPhone [source: Time]. Designed for use in urban areas, where range and top speed are not of great concern, the Eclectic could help bring clean, personal transportation to populous countries such as China and India.

So, is this car economically viable? We know that automakers' failure to meet consumer demand for fuel-efficient, environmentally friendly cars put many car manufacturers in the worst financial straits they've seen in decades. Could the Eclectic finally usher in a new era of renewable energy-powered automobiles? It's impossible to predict the future with pinpoint accuracy, but, as French writer Victor Hugo once said, "There is one thing stronger than all the armies in the world, and that is an idea whose time has come."

Was the Ford Edsel really that much of a failure?
Rod Riguez: Profile of a Hot Rod
How Flying Cars Will Work