Can I power my car with AA batteries? 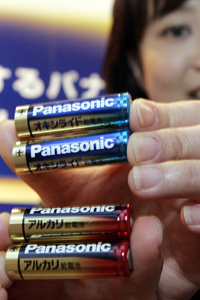 Sure, AA batteries are great for powering your electronic equipment, but what about a car?
AP Photo/Koji Sasahara

We use batteries for just about everything in our lives, from our cell phones and laptop computers to the toys our kids play with. These tiny miracle machines are quite amazing, really. You can't see it, but a chemical reaction that generates electricity is happening just inside the outer shell of the battery casing. A battery provides a flow of electrons -- from the negative terminal to the positive terminal -- resulting in an electric current. If you'd like more detailed information about the internal workings of batteries, you can also read How Batteries Work.

We know that electricity is a powerful thing, and there's no denying that it's having a greater impact on transportation every year. While electric cars have been around as long as cars themselves, we're seeing more and more car companies investing significant resources into electric-powered cars -- including gas-electric hybrids. But the batteries in those cars are fairly large and costly, too.

But do you think it's possible to power a car -- one that you can actually sit in and drive -- using simple, household AA batteries like the ones you might find in a kid's toy or a clock radio?

The short answer is yes. It's possible; however, this hasn't been attempted very often because AA batteries have such lower power outputs. The typical AA battery generates just 1.5 volts of electricity. Compare that to the battery pack on a typical hybrid car, which can generate about 300 volts -- enough to power the car (via electric motor) without the use of its engine at low speeds.

Imagine then, just how many AA batteries it would take to power a full-size hybrid car, and how difficult (and costly) it would be to constantly swap fresh, new batteries for old, worn-out batteries. In other words, it's really not very practical to run a car using standard household batteries.

But that didn't stop a few engineers from giving it a shot. In one memorable instance, a team of gear heads in Japan was able to get a AA battery-powered car -- yes, an actual, working car -- to run up to 75 miles per hour (120.7 kilometers per hour)! 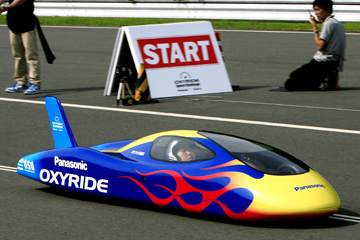 Driver Takashi Sudo steers the Oxyride racer powered only by 192 AA Oxyride dry batteries, during its run for a world record, at a test course near Mito, Ibaraki prefecture, north of Tokyo, on Aug. 4, 2007.
AP Photo/Shuji Kajiyama

In 2006, Japanese electronics maker Panasonic teamed up with the Tokyo Institute of Technology to create a manned airplane powered by 160 AA batteries. While that was an incredible achievement, Panasonic wanted to make it into the Guinness Book of World Records, and apparently manned, battery-powered airplanes wasn't a category in the Guinness record book [source: Guinness World Records].

So, in 2007, Panasonic found another target: besting the land-speed record for a dry-cell battery-powered car. And so, the Panasonic Oxyride Speed Challenge began. It was named for the powerful -- 1.7 volts instead of the standard 1.5 volts -- non-rechargeable batteries made by the company.

The car was built by Panasonic engineers and students from Osaka Sangyo University, and it was quite different from the cars we drive to work everyday. Sitting just inches off the ground at 1 foot, 10 inches (56 centimeters) in height, it looked more like a long, low-riding bullet with tires than a car. This vehicle was built more along the lines of a soapbox racer than a typical street car, and through the use of ultra-lightweight carbon fiber, it weighed a scant 83 pounds (38 kilograms).

That small size was necessary to get the car up to speed -- Panasonic wanted 65 miles per hour (104.6 kilometers per hour) -- on the relatively small amount of power that AA batteries can provide. In this case, the racer used 192 AA batteries. That's right -- imagine a battery pack consisting of 200 of the same batteries you use in your clock radio being used to bring a vehicle up to highway speeds!

The battery pack was placed in the rear of the vehicle right behind driver Takashi Sudo, who reclined flat on his back to pilot the car. Once he was inside, the crew placed the plastic and carbon fiber body over him.

So, while you may not be commuting to work in the Panasonic AA-powered speedster anytime soon, Panasonic did prove that you can power a car with AA batteries. That is, provided you have a whole lot of them, a vehicle that's extremely lightweight and aerodynamic and with the added expectation that it'll only operate for a very short distance.

For more information about batteries, battery-powered cars and other related topics, follow the links on the next page.

Sweet Sorghum: The Sweetest Fuel You'll Ever Taste!
Will cars ever run on carbon dioxide, or is that marketing hype?
What is the world's cheapest alternative fuel car?