Can I buy an electric car at Sam's Club? 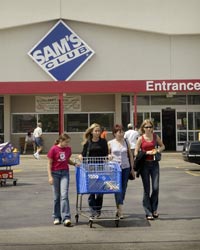 Will you be able to buy electric cars in bulk at Sam's Club now?
Scott Olsen/Getty Images

Large retail stores like Sam's Club and Costco are known for their enormous spaces and rows upon rows of goods and foodstuff. And this isn't just any kind of product. These goods are in bulk. That magic word -- bulk -- entices loyal customers to sign up for membership cards, struggle through huge crowds and push lumbering flatbed carts in between mazes of oversized buckets and plastic-wrapped bundles of packages.

The obvious draw is that although you're buying a lot of one item, food and other goods are priced cheaper on a per-unit basis. So, if you're eating a certain kind of cereal every day of the week and plan on buying it indefinitely, it might make sense to buy from one of these warehouse clubs and save some money over time.

While people shop at Sam's Club mainly for food in bulk, you can find other things there, too. The store offers practical items like outdoor furniture, air conditioners and fans and mattresses, and they also sell entertainment products like music, DVDs, televisions and other various electronics. It's even offering newer trends in computer hardware, such as inexpensive netbooks, on its Web site.

Ultimately, it's still not the first place you'd generally go for these things. Lately, however, Sam's Club customers were a little surprised by a few package deals that you wouldn't normally find while cruising down its aisles, something you're unlikely to find in either supermarkets or electronics stores.

So imagine you're perusing the giant warehouse. You've grabbed your bundles of cereal, you've lugged a giant box of trail mix onto your cart and maybe you decided to pass on the gallon jug of mayonnaise. But just as you round a corner you spot something big, shiny and red. Much to your surprise, it's an electric car. Not a model or a toy, but a full-size, get-in-and-drive-it-on-the-highway electric car.

Of course, this isn't exactly the way it would happen -- but is there some truth to this? Can you really get an electric car through Sam's Club? 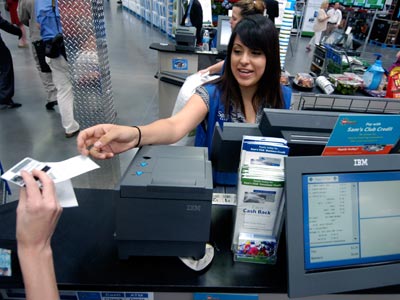 For the past two years Sam's Club and Hybrid Technologies have offered special packages for members on unique electric cars -- keep an eye on future brochures for any more $100,000 deals.
AP Photo/April L. Brown

As it turns out, Sam's Club isn't exactly a stranger to the electric car business. In 2007, the membership-only warehouse club teamed up with Hybrid Technologies, an auto engineering company which is now under the name EV Innovations, Inc., for a unique offer. Hybrid Technologies gained recognition by retrofitting conventional gasoline-powered cars like the MINI Cooper, the Chrysler Crossfire, the PT Cruiser and the smart fortwo into electric vehicles (EVs). EV Innovations, Inc. is a startup company, just like any other. However, the main difference in its approach is that instead of designing completely new electric cars, it has put all its efforts into converting already existing conventional models into electric ones.

The somewhat offbeat offer the two companies (Sam's Club and Hybrid Technologies) pitched to Sam's Club members was a "Once-in-a-lifetime" package: a 2007 Hybrid Technologies' lithium-ion-powered smart car. There was also an unlikely third party involved -- as if this scenario couldn't get any more unlikely: The electric car also featured "cutting-edge technology from NASA," and the package included a trip to the Kennedy Space Center for a viewing of a shuttle launch. The connection? Hybrid Technologies originally designed the lithium-ion-powered smart car for the Kennedy Space Center.

More recently, Sam's Club and Hybrid Technologies have presented card-holding members with another chance for an electric sports car. In November of 2008, customers were informed of yet another "once-in-a-lifetime" event -- this time the promo offered an all-new electric sports car designed by Hybrid Technologies, not just a retrofit. Although not much information about the car was released, the offer promised a 200-mile (321.9-kilometer) range, a 0 to 60-mile per hour (0 to 96.6-kilometer per hour) time of five seconds and a top speed of 150 miles per hour (241.4 kilometers per hour), making it much sportier than your typical electric car.

So what was necessary to own this car? Well, a Sam's Club membership, for starters -- but you'd also need $100,000. The first member to log onto the Sam's Club Web site on Nov. 12, 2008, could buy the car, and within 12 hours there was actually a taker. On top of the electric car, the owner also received round-trip airfare to Los Angeles to personally see the first production car driven off the assembly line, training at a local race track and shipping to get the car home.

For lots more information about electric cars, hybrid cars and fuel-efficient technology, follow the links on the next page.

What is my vehicle's greenhouse gas score?
How much corn would I need to fuel a cross-country trip with ethanol?
Is there a future for steam-powered, super-efficient cars?