What is the world's cheapest alternative fuel car? 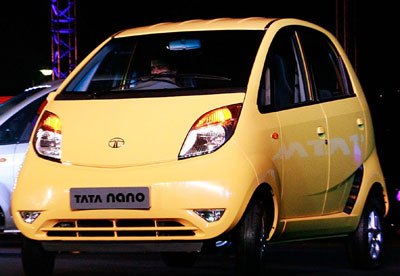 A few lines from the Kinks' 1979 hit "Low Budget" come closest to describing Tara International's Tara Tiny: "Cheap is small, and not too steep, but best of all, cheap is cheap."

Those lofty goals don't change the fact that the Tara Tiny is really, really cheap. The Tiny will only be sold in India and will set consumers back about 99,999 rupees, or roughly $2,400. This price trumps its closest Indian rival by one rupee. That rival, the Tata Nano, was once billed as the world's cheapest car and had an initial sticker price of 100,000 rupees.

While they're extremely close in price, the two cars are worlds apart in design. The Nano uses a traditional gas engine. On the other hand, the two-door Tiny is a battery-powered electric vehicle (EV) -- a car that's easy on the wallet and the environment.

While you may never see the Tiny on American shores with a $2,400 price tag, read on to find out what makes this car more than cheap fun -- and what makes the Tiny a possible contender in the growing alternative-fuel vehicle market.

The Tara Tiny was built for simplicity, efficiency and cost, so extras are considered, well, extra. Here's a quick outline that shows what the two-door, two-seat Tiny base model has to offer.

In addition to the list above, the two-door vehicle has a three-speed automatic transmission, front disc and rear drum brakes, manual seat adjustment for the driver, a driver-side mirror, fog lamps and windshield wipers. That's it. As we said before, extras are extra on the Tara Tiny.

However, planned variations on the Tiny will offer four doors, four seats, air conditioning, power steering and windows and a sound system. The company reportedly plans on adding more amenities -- but only to a point.

While the Tiny is simple in design, it's exactly what Ganguly envisioned. Read on to learn how the Tiny became such a wonder of minimalist engineering.

If you're looking for the world's cheapest alternative fuel vehicles, you're likely to find them in emerging markets. Why? Many industrialized nations have strict emissions and safety standards that can add $5,000 to $10,000 to the price of an average car. Throw in the cost to develop alternative fuel technology and the cheapest vehicles could cost consumers an extra $20,000.

India and China, two of the biggest players in the developing world, have been transportation innovators for centuries. Now, as their own technology bases take hold and thrive, savvy car companies and engineers are producing a variety of green vehicles. One prime example is the Kanso, developed by Indian automotive wunderkind Kanak Gogoi. The two-seat Kanso runs on gasoline and energy derived from four solar panels. The Kanso doesn't have a transmission, but the solar panels can reportedly generate 320 watts of power. How the car uses two forms of energy remains a question. However, the small car will have a 0.1-liter engine, will boast top speed of about 30 mph (48 kilometers per hour) and could sell for around $3,800 [source: Khaund].

The Tara Tiny attains a reported top speed of about 25 mph (40 kilometers per hour). Tara International chairman and CEO Tara Ganguly doesn't see this as a problem. In fact, Ganguly envisioned the Tiny as an inner-city vehicle that isn't meant to be driven on the ultra-clogged highways of India. (In other words, road trips are a bad idea.) On city streets, an electric vehicle has distinct advantages over its gasoline-powered cousin.

Some of these advantages include:

The final factor -- and perhaps the most important one for Ganguly -- is efficiency. However, examining an EV's efficiency means getting into the guts of the vehicle, which we'll do in the next section.

An Alternative to What?

Electricity: Battery technology and electric motor improvements have pushed this method to the forefront as a viable alternative to gasoline.

Alcohol fuel: Wood grain alcohols can be used as fuel in cars with specially modified engines.

Biodiesels and refined organic oils: These fuels are mainly used in diesel engines and are known for their distinctive french fry smell.

Compressed air: This experimental fuel uses a tank of compressed air to power the vehicle.

The Power of the Tara Tiny

Aside from the bicycle, the electric motor has the highest efficiency rating -- more than 90 percent -- of any mechanical device that converts energy to motion. What that means is that only 10 percent of the energy used by an electric motor is "wasted" getting the car moving. By comparison, the best efficiency rating for an internal combustion engine is about 20 percent, meaning that about 80 percent of the energy in a given amount of gasoline is used simply to get power to the car's wheels.

This is why cars generally get better mileage on the highway: Once a car gets rolling, it takes less energy to keep it rolling, allowing drivers to go further with less gas. Where a gas engine uses the most energy is where an electric motor conserves energy -- on the initial start.

Ganguly, as an engineer, knew all the moving parts of an engine -- cranks, gears, drivelines, differentials -- need to get moving before the rotary motion is transmitted to the wheels. Ganguly also considered an engine's "idle time." When a car comes to a stop, the engine has to keep moving and using energy to produce what is essentially wasted motion inside the vehicle in anticipation of the next time the car needs energy.

An electric motor solved both problems. An electric motor produces its maximum torque almost immediately. If the motor is linked directly to the wheels, that energy is instantly available to move the car. Plus, there's no need to keep the motor in motion when the car is idle. The motor can shut off to conserve energy. The Tiny also uses an unspecified number of sealed lead acid batteries, a throttle-like electronic controller, a converter and motors.

While Tara International hasn't yet divulged release dates for its other vehicles, the Tiny and its innovative simplicity may set the standard for EV use in the coming years.

For more information on the Tara Tiny and other electric vehicles, visit the links on the following page.