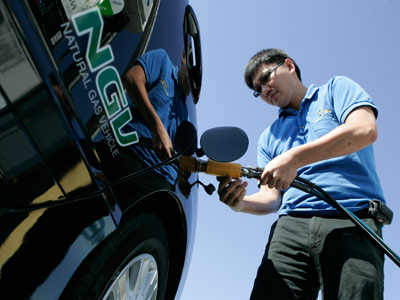 By now you've probably heard that eco-friendly driving can help minimize your carbon footprint and reduce dependency on imported oil. Perhaps you've even considered taking up green driving in a car or truck that runs on an alternate fuel? But have you ever wondered how and where you'll fuel up your new wheels? Read on and we'll provide some clues.

First, however, let's define our alternate fuels set. We'll make it simple and use the U.S. Dept. of Energy's list, which includes:

Methanol, or wood alcohol, was once viewed as a promising alternate fuel, but to date, no cars designed to run on methanol are being manufactured [source: Alternative Fuels and Advanced Vehicles Data Center]. Methanol is used as a base for making biodiesel, though.

­Liquid alternative fuels, such as E85 and biodiesel, are commonly available through slightly modified versions of the self-service pumps used to dispense conventional gasoline and diesel. Pressurized gases like CNG and LPG have traditionally been handled by fueling station attendants. However, self-service pumps are increasingly being manufactured to handle pressurized fuels, including hydrogen. Self-service pumps help make it possible to offer pressurized alternate fuels 24/7, just like gasoline and other liquid fuels. The newest alternative fuels pumps for pressurized fuels operate very much like contemporary gasoline pumps--delivering the fuel through a hose connected to the vehicle's fueling port, while also computing the amount and cost of the fuel pumped into the vehicle.

Will one alternate fuel type emerge victorious nationwide? Probably not. In the East, analysts foresee electric vehicles achieving dominance in large metro areas [source: Amadon]. Ethanol will likely find continuing favor in the Midwest, where the crops used to produce it are primarily grown. And electric cars may also take charge in the emerging West Coast megalopolis, while the alluring fuel efficiency of diesels could make biodiesel the fuel of the future for those who routinely traverse America's wide-open spaces.

On the upcoming pages, we'll look at the current distribution of alternate fuel stations across the United States. But first, let's discuss how alternate fuels are dispensed. 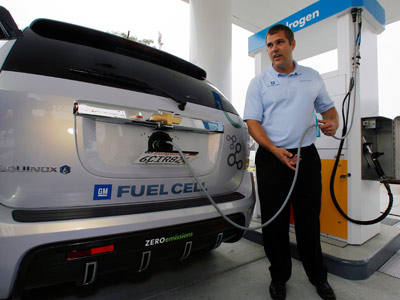 Makers of alternative fuels want drivers to be able to fuel up easily and conveniently with the type of fuel they provide. Some alternate fuels already enjoy wide availability, with convenient access via fuel pumps. Others are just becoming available to consumers, and only at a few locations. Here's a quick status report on what's out there right now:

Flex-Fuel vehicles run on E85, which is 85 percent ethanol -- a fuel made from renewable organic resources -- and 15 percent gasoline. Filling up with E85 for green driving is achieved in exactly the same manner as with gasoline -- just pull up next to the pump and fill it up.

Biodiesel blends add a green tint to diesel engine fuel efficiency. According to The National Biodiesel Board, the most popular and widely available blend is B20, consisting of 20 percent renewable resource biodiesel and 80 percent fossil fuel diesel. Regionally adjusted biodiesel blends are usually found at dedicated stations, and biodiesel is dispensed in the same manner as other liquid fuels.

Most natural gas vehicles (NGVs) run on compressed natural gas (CNG), but some large trucks use highly pressurized liquefied natural gas (LNG). A special tank is required to hold the natural gas and other special vehicle equipment is necessary, too. "Bi-Fuel" vehicles can actually switch between CNG and gasoline tanks. Natural gas is usually dispensed by attendants at authorized service centers, but self-service pumps are beginning to appear. In selected areas of California and several other states, vehicle owners can legally fuel their NGV at home, through a home fueling station appliance called "Phill" [source: MyPhill.com].

Liquefied petroleum gas (LPG, or propane) is another relatively clean burning fossil fuel. As with CNG, a special high-pressure fuel tank and components must be installed in the vehicle. Although factory LPG-fueled vehicles were last offered in 2004, aftermarket conversions are readily available. LPG is sold in many locations, such as truck and trailer rental stores and RV centers. An attendant typically handles fueling, but some 24/7 self-service LPG stations can be found.

Hydrogen has great promise for eco-friendly driving, yet it presents significant challenges from an infrastructure and distribution standpoint. Most existing hydrogen fueling stations supply commercial fleets and are of restricted access; however, a few stations featuring self-service hydrogen pumps open to the public have been announced recently. Stations located along envisioned "hydrogen highways" might eventually make hydrogen available along established national corridors.

The fuel efficiency of plug-in hybrid and fully electric cars is supported by stand-alone public charging stations located in parking garages or curbside. Of course, virtually any accessible conventional electrical outlet is a potential charging station.

Now, let's roll on to the next page, to discover how to locate alternate fueling stations near you.

The Alternative Fuels and Advanced Vehicles Data Center (AFDC), sponsored by the U.S. Dept. of Energy, is a great resource for information about relative fuel efficiency and other pros and cons of front-running alternate fuels. It also maps more than 6,100 alternative fueling locations across the United States. These can be searched on the AFDC website by entering the address or ZIP code [source: Alternative Fuels and Advanced Vehicles Data Center]. Other sites dedicated to specific alternative fuel types may provide updates about new station openings and other developments.

Flex-Fuel vehicle owners have 1,860 locations across the lower 48 states where they can fill up with E85 for green driving. Minnesota has the most with 358 locations, while Illinois is second with 187. Indiana, Iowa and Wisconsin each have more than 100 E85 locations. New York has just 30 stations and New Jersey has none. Several New England states also have no E85 stations, and in all of California, there are only 19 stations where driver's can fill up with E85.

Biodiesel can be found at 691 stations in the United States, with at least one located in every state. South Carolina leads the country with 75 stations; neighboring North Carolina has 69 more. In the Pacific Northwest, Washington State reports 42 biodiesel stations, followed by Oregon with 36, and California has 48.

Hydrogen initiatives have been strongest in California, where 27 of the 59 hydrogen-fueling stations nationwide are located. Michigan comes in second, with seven stations. Thirty-two states have no hydrogen fueling stations - not yet, anyway.

California supports eco-friendly driving with more than 400 public plug-in electric charging stations, many of them free-use solar-powered units. No other state even comes close, with runners-up Oregon and Massachusetts reporting 14 and 12 stations, respectively. Twelve states have fewer than 10 public charging stations, while 32 states report they have none.

Use the AFDC and other similar Web sites to determine the convenience of alternate fuels in your locale. Remember to ask station attendants in your area about access, vehicle compatibility and hours of operation -- information you'll assuredly want to know before you "go green" with an alternative fuel vehicle.

For more information about alternative fuel filling stations or other related topics, follow the links on the next page.

How Biodiesel Works
Can the U.S. Navy turn seawater into jet fuel?
This Woman's Job Is to Figure Out Why People Don't Buy Electric Cars