by Chuck Giametta
NEXT PAGE 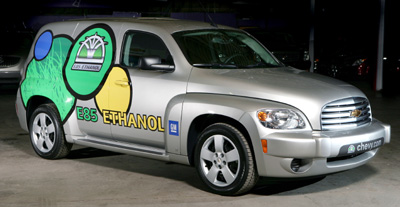 Drivers jumping on the latest gas-saving bandwagon may be in for a shock when they see fuel-economy estimates for the newest darlings of Detroit: E85 ethanol flex-fuel vehicles. Run a new V6 Chevrolet Impala on good-old gasoline, and it'll get 21 miles per gallon in the city, 31 on the highway, according to Environmental Protection Agency (EPA) estimates. Burn E85 -- a blend of 85 percent of the alcohol-based fuel ethanol and 15 percent gasoline, which American automakers flaunt as their latest alternative-energy idea -- and the Impala's EPA numbers shrivel to 16 mpg city, 23 highway.

It's no better with other kinds of flex-fuel vehicles, vehicles that can run on E85, 100 percent gasoline, or a combination of the two. Run a two wheel-drive V8 Ford F150 on regular unleaded gas, and the EPA says it'll get 14 mpg city, 19 mpg highway. Run it on E85 ethanol, and it gets 11 mpg city, 14 mpg highway. In other words, fill up on environmentally friendly E85 ethanol, and you'll get fewer miles per gallon than you would on gasoline.

Sound depressing? Not if you believe that what's bad for the E85 ethanol user is good for America's fuel strategy. After all, a mile driven on E85 ethanol fuel is a mile not driven on conventional gasoline. And that, according to President Bush and proponents of E85 ethanol, can help America end its dependence on foreign oil.

Joining these E85 ethanol boosters are General Motors and Ford, which have mounted massive new E85 ethanol support programs. Spurred by public and private efforts to pump up E85 ethanol demand, ethanol producers themselves are pouring billions of dollars into building new refineries.

As with any alternative-fuel idea, however, the E85 ethanol story is one of tradeoffs. It pits, for example, E85 ethanol's ability to lower air pollution because it burns cleaner than gasoline against the potential environmental costs involved in ethanol production.

We've highlighted some tradeoffs in E85 ethanol fuel economy (more about that later), but are there compromises in convenience and vehicle performance? These and other issues are thoroughly explored in the following sections: