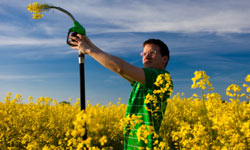 Biofuels made from plants could one day help us reduce our dependency on fossil fuels.
iStockphoto/Thinkstock

In Dallas, grease is good. And not just any grease, but the grease used to cook French fries, onion rings and yes, even pickles. In an effort to save money on fuel and reduce its carbon footprint, the city's school district is converting all of its 1,700 buses to run on a special engine that runs on both biodiesel and recycled vegetable oil donated by local restaurants. In 2009, the first bus, the Fryer Flyer, took to the road. Officials expect to save $400,000 each year by running its entire bus fleet on the biofuel [source: NPR].

For years, politicians, journalists and scientists have touted biofuels -- fuels made from plants -- as a way to decrease the world's consumption of fossil fuels, especially oil. These so-called "energy crops" include wheat, corn, soybeans and sugarcane [source: Walker]. Biofuels burn cleaner than fossil fuels, releasing fewer pollutants and greenhouse gases, such as carbon dioxide, into the atmosphere. They are sustainable, and energy companies often mix biofuels with gasoline. In other words, unlike oil, coal or natural gas, biofuels won't run out.

Biofuels fall into two main categories: bioalcohol and biodiesel. To create bioalcohol, such as ethanol, engineers use yeast and bacteria to break down the starch in corn and other plants. To create biodiesel, refineries use the oil already found in crops such as soybeans [source: Thomas]. These vegetable oils are treated with alcohol and turned into biodiesel.

There are, however, some drawbacks to these miracle fuels. Among other things, some energy crops compete with food crops for land, creating problems like higher food prices and deforestation. In addition, the costs of converting some energy crops, as well as retrofitting cars and power plants to run on biofuel, can be pricey [source: Brune]. Find out what else there is to consider about the top 10 biofuel crops.