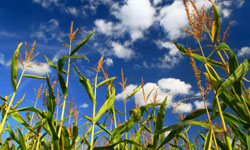 Edible biofuels, like corn, can be an environmentally friendly alternative to fossil fuels.
iStockphoto/Thinkstock

Taking a sip from a modern car's fuel tank is a bad idea. The gasoline and petroleum-based diesel fuels that power most of the world's automobiles are fairly far removed from anything nutritious, or even safe, to drink.

But that's changing. A growing industry has been investigating fossil-fuel alternatives for decades, and much of their research focuses on biofuels -- petroleum substitutes made from natural plant oils [source: Demirbas]. In some cases, pure, unaltered vegetable oil can power standard diesel engines; after all, Rudolph Diesel originally designed the engine that bears his name in an attempt to give farmers the ability to operate equipment using locally grown fuel. But pure vegetable oil, while certainly a biofuel, has limitations. The glycerin in natural oils increases their viscosity, making them solidify in cold temperatures; think about what happens to bacon grease if left in the refrigerator. This could be bad news for the fuel lines, filters and injectors on an engine in Alaska, for example.

Chemists have a pair of solutions to this problem. Some plants, such as corn, contain sugars that, when fermented like beer and liquor, produce ethanol, an alcohol that can be used as fuel. Ethanol is frequently used as a smog-reducing additive in gasoline; it's the E in E85 [source: Chu].

Other plants, such as soybeans, are better used to produce biodiesel. In this process, a catalyst is mixed into the oil, separating the glycerin from the oil's fatty acid alkyl esters [source: Pimentel]. With the glycerin gone, biodiesel can run most diesel engines with less fouling and cold-weather problems.

Biofuel infrastructure is still under development in many parts of the world, and the processes to produce some types of biofuel are not yet efficient enough to justify large-scale production [source: Pimentel]. But the need to find a more environmentally friendly alternative to fossil fuels means that, sooner or later, the fuel in your gas tank will have a lot in common with what's on your plate. To get an idea of where the biofuel future may be headed, read on to learn about 10 biofuels that could just as easily feed you as your car.