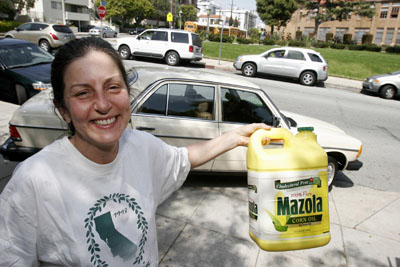 It would be nice if we could find a new kind of fuel to use in our cars, something that gives us good mileage and doesn't cost much. What if we could use some common and easily available substance for fuel? What if we can use a substance that no one really wants: If they're going to throw it away, they'd probably just give it to us if we asked, right?

Free fuel would be great - if we could get it. Incredibly, that's exactly what some people are getting by using vegetable oil in their cars. Most restaurants just throw the stuff away when they're done cooking with it, so veggie fuel fans work out deals with their local eateries to come by periodically to pick up batches of old oil. Does it even matter what kind of mileage you get when the fuel is free?

Of course there's a catch: You can't just dump vegetable oil into your tank and drive off into the sunset. You'll ruin your engine. It's also not a guarantee that a vegetable oil-based energy policy would work on a nationwide scale; however, it does provide another alternative to expensive and increasingly scarce fossil fuels.

To learn how we can fill up our gas tanks with last night's chicken grease, we must first learn to distinguish between vegetable oils used as fuels and biodiesel. Biodiesel is a type of fuel derived from vegetable sources, often soy, but is refined at a special facility which must follow anti-pollution laws and other fuel regulations. Many vehicles with diesel engines can run on biodiesel or a blend of biodiesel and petroleum diesel without much modification [source: National Biodiesel Board].

Using vegetable oil to fuel a vehicle is an entirely different matter. You're basically using the vegetable oil you can buy at the supermarket (or get for free from a restaurant) as fuel. It's more of a do-it-yourself type of alternative fuel. It doesn't go through any refining process and it isn't regulated or tested according to environmental laws. In fact, using this type of fuel could be illegal in some states, as state and federal revenue agents in the U.S. require special licenses to drive the converted cars as well as payment of motor fuel taxes [source:Freeman].

How do we actually use vegetable oil to power our cars? Let's dig in on the next page. 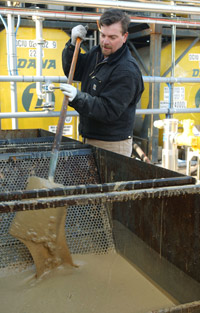 This vat of used and cooled, vegetable oil must be filtered thoroughly before it can power your next road trip.
Melanie Conner/Getty Images

How exactly do you use vegetable oil as fuel? First, you must have a diesel engine. The spark ignition used in a standard gasoline-powered engine would have a very hard time achieving combustion with vegetable oil. The fuel lines and pumps in a gas engine aren't intended to handle this type of fuel, and many of the sensors used to determine fuel ratios in modern cars simply can't cope well with this variation.

Assuming you have a diesel engine, you could use vegetable oil with no other modifications. However, vegetable oil has very high viscosity. It's so thick that the engine has a hard time atomizing the fuel completely when it is sprayed into the combustion chamber. The result is unburned fuel that clogs the engine.

There are several solutions to this problem. The first is to mix the vegetable oil with more conventional fuels, such as petroleum diesel. This lessens the clogging problem but doesn't completely remove it. Another solution is a two-tank system that uses petroleum diesel to start and shut down the engine. This heats up the engine on start-up, and flushes the veggie oil out of the engine before you shut it off. The veggie oil other tank is heated, since warmer vegetable oil can be atomized more effectively. In fact, vegetable oil is often solid at room temperature, so it needs to be heated to work at all. However, this still isn't the total solution.

To effectively use vegetable oil as fuel, some significant engine modifications are required. Start by installing some new fuel injector nozzles with an extensive filtering system to make sure only clean fuel gets into the combustion chamber. Those who use dirty cooking oil from restaurants must run the oil through several filters before they can pour it in their gas tank. Any fine, durable fabric can be used as a filter to keep out bits and pieces of food or other contaminants that could clog fuel lines -- a 40 micron mesh filter is recommended. New glow plugs, used to ignite the fuel in cold start conditions, can also improve performance if they are designed specifically for use with vegetable oil. Additional heating of the fuel can be accomplished by placing engine coolant lines in contact with fuel lines. The hot coolant will reduce the vegetable oil's viscosity.

Several companies produce kits that include everything needed to perform this modification. They range in price from a few hundred dollars to almost $3,000, not including installation. The Elsbett Company produces engines designed specifically to run on vegetable oil, although the company also performs engine conversions.

Vegetable oil is a very green way to fuel our cars, but will using it actually save us any green? Find out on the next page. 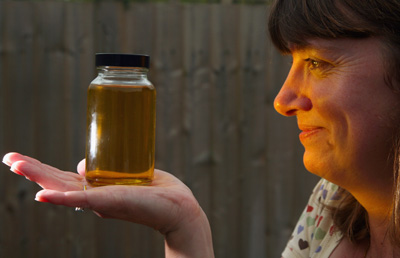 10 Real Ways to Save Fuel
What is the history of electric cars?
Why doesn't gasoline burn cleanly?