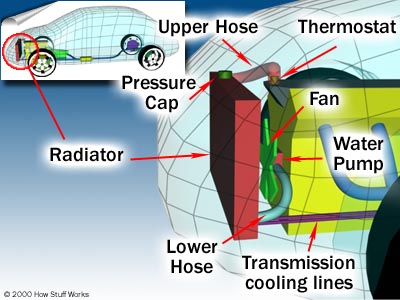 Diagram of a cooling system: how the plumbing is connected. Want to learn more? Check out these car engine pictures.
HSW

The engine in your car runs best at a fairly high temperature. When the engine is cold, components wear out faster, and the engine is less efficient and emits more pollution. So another important job of the cooling system is to allow the engine to heat up as quickly as possible, and then to keep the engine at a constant temperature.

In this article, we'll learn about the parts of a car cooling system and how they work. First, let's look at some basics.