How does the thermostat in a car's cooling system work?

If you ever have the chance to test one, a thermostat is an amazing thing to watch because what they do seems impossible. You can put one in a pot of boiling water on the stove. As it heats up, its valve opens about an inch, apparently by magic! If you'd like to try this yourself, go to a car parts store and buy one for a couple of bucks.

The secret of the thermostat lies in the small cylinder located on the engine-side of the device. This cylinder is filled with a wax that begins to melt at perhaps 180 degrees F (different thermostats open at different temperatures, but 180 F/82 C is a common temperature). A rod connected to the valve presses into this wax. When the wax melts, it expands significantly and pushes the rod out of the cylinder, opening the valve. If you have read How Thermometers Work and done the experiment with the bottle and the straw, you have seen the same process in action. The wax happens to expand a good bit more because it is changing from a solid to a liquid in addition to expanding from the heat.

This same technique is used in automatic openers for greenhouse vents and skylights. See this page for an example. In these devices, the wax melts at a lower temperature.

These links will help you learn more: 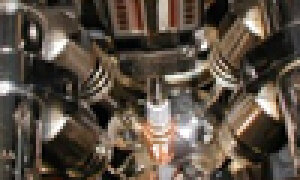