How does an engine cooling system work? 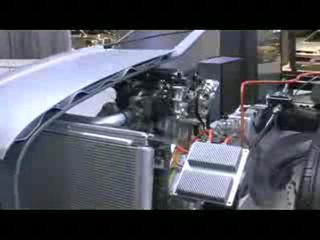 A car’s engine operates most efficiently at high temperatures, emitting less pollution and keeping its components in top condition. However, as a car burns fuel, it produces a surplus of heat. The job of the car’s cooling system is to allow the engine to quickly attain its maximum temperature, maintain that temperature during its use and release the excess heat into the air.

The cooling system is composed of various parts: the radiator, pressure cap, fan, pump, thermostat, hoses and overflow tank. The pump sends cooling fluid to the engine where it absorbs the engine’s heat. After exiting the engine, it runs by a thermostat. If the cooling fluid is below the maximum temperature, the thermostat stays closed and the fluid is re-routed back to the pump. However, if the fluid is overheated, the thermostat’s valve opens, routing the fluid through a radiator first. The radiator cools the fluid by releasing its heat to the air before returning it to the pump.

Engines are heated in a similar way when starting up the car. The pump starts the process by sending fluid through the engine. As the fluid leaves the engine, if it hasn’t reached the minimum temperature, it needs to pass through a heater core before being re-routed to the pump.