How an Air-cooled Engine Works 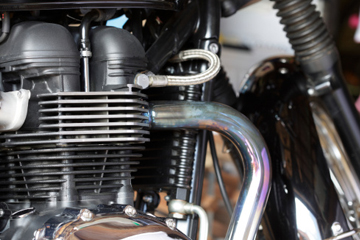 Maybe you haven't given much thought to how your engine keeps its cool. That's understandable. As long as it works, there's no point in thinking too much about it, right? But do you even know what kind of cooling system your car has?

If you have a modern car, you probably have a water-cooled engine that uses a water and coolant mixture to, well, cool the engine. But some engines don't need coolant. They don't have radiators and they don't regulate the internal temperature of the engine. It sounds a little like magic, but it's not.

It's a throwback technology that's really no technology at all. These engines are called air-cooled engines and chances are you've seen one, even if you didn't recognize it.

Design of an Air-cooled Engine

The premise of an air-cooled engine is actually pretty simple: Let air flow over the engine to keep it cool.But since this article needs to be a little bit longer than that, we'll touch on a few more details (for my editor's sake, anyway).

Most modern cars use water-cooled engines with radiators, water pumps and hoses that circulate a water and coolant mixture throughout the engine. The heat from the engine is transferred to the coolant, and then the coolant is cooled in the radiator and sent back around again.

Air-cooled engines have fins extending out from the engine to pull heat away. Cool air is then forced over the fins -- typically by a fan in cars. For aircraft and motorcycles, the vehicle's speed alone moves enough cool air over the fins to keep the engine cool.

Some air-cooled engines may also have ducts around the engine to keep air flowing to the hottest areas. Some aircraft engines may even have baffling systems that channel high-pressure air into the cooling fins.

This doesn't sound much like magic anymore does it? 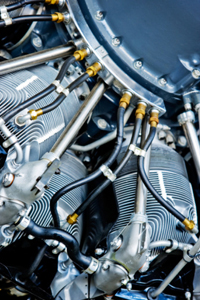 Aircraft have had the longest running air-cooled track record because many helicopters and small planes have remained air-cooled right from the start.
A485/Photographer's Choice/Getty Images

You'd be hard-pressed to find an air-cooled engine rolling of the auto assembly line these days, but that doesn't necessarily mean they're anywhere near dead.

If you hop on a motorcycle, all-terrain vehicle, or even a common riding mower then you're probably experiencing an air-cooled engine (although some motorcycles are liquid-cooled). But it's aircraft that have had the longest running air-cooled track record because many helicopters and small planes have remained air-cooled right from the beginning.

Benefits and Limitations of Air-cooled Engines

Obviously, and air-cooled engine doesn't have coolant leakage problems and won't ever require things like the water pump or radiator to be replaced, which can be a great thing. Typically, they're lighter than liquid-cooled engines, too, because they have fewer parts.

Air-cooled engines also warm up a lot faster than liquid-cooled engines and don't have any risk of the coolant freezing, which is beneficial if you're operating the vehicle in extremely cold temperatures.

But there are some considerable drawbacks, too. For starters, air-cooled engines are more likely to overheat. Yeah, that's a bummer. They can also be more expensive to build and the large fans used to cool the engine can take away a lot of power.

This doesn't mean that air-cooled engines are bad or ineffective. In fact, for motorcycles, recreational vehicles and certain aircraft the air-cooled engine works extremely well. But on cars, the common consensus is that the drawbacks outweigh the benefits.

While I was reading about air-cooled engines I came across a lot of Web sites with tons of air-cooled engine fans. I've been writing about cars for years now, but I'm always amazed at the niche groups that are out there for almost any type of automotive category. If you like a specific type of engine in a certain type of car you're almost guaranteed to find a group of people who have already formed a club around it.

Although air-cooled engines have been around a long time, I've never really thought much about them -- so I enjoyed researching a type of engine that's somewhat hard to find in an automobile these days. It's always interesting to see how engines have evolved over time. We add and replace systems in order to create the most efficient and long-lasting engine that we can; but in the end, they all basically function in the same way, with the same basic principles.