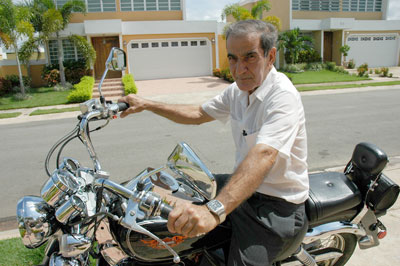 Since 1998, the number of motorcycles in the United States has increased by 34 percent [ref]. Why the sudden spike in popularity? Unlike cars, motorcycles allow riders to connect intimately with the driving experience. But it's not just about adventure and freedom. With gas prices soaring, motorcycles, which can achieve fuel economies as high as 85 miles per gallon, provide an attractive alternative to gas-guzzling cars.

Motorcycles are motorized vehicles for transporting one or two riders. Generally, a motorcycle has only two wheels, but any vehicle with fewer than four wheels in contact with the ground can be classified as a motorcycle. Three-wheel variations of the motorcycle include the "hack" (motorcycle plus sidecar) and the "trike" (short for motortricycle).

The layout of the modern motorcycle was established by 1914 and has remained fundamentally unchanged ever since. The overall structure and function of a motorcycle is quite simple. It includes a gasoline engine, which converts the reciprocating motion of pistons into rotary motion, just like the engine in a car. A transmission system transmits this motion to the back wheel. As the back wheel turns, it propels the motorcycle forward. Steering is accomplished by turning the front wheel via the handlebars and by leaning the bike to one side or the other. Two hand levers enable the rider to operate the clutch and the front brake, while two foot pedals enable him to change gears and control the rear brake.

In this article, we'll learn how the modern motorcycle operates, how motorcycle design has evolved over the years and how motorcycles might change in the near future. But first, let's talk about motorcycle engines.

What's in a Name?

The term "biker" has come to be associated with members of motorcycle gangs, which is why many motorcycle enthusiasts prefer the terms "rider" or "motorcyclist." Born-again bikers are motorcycle riders in their 40s and 50s, a demographic that had not been well-represented in the general population of motorcycle owners until recently.