How does an electric water pump benefit your engine? 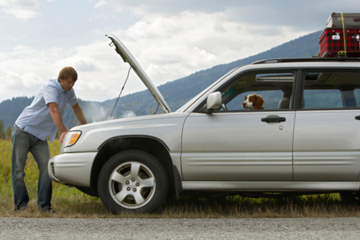 Let's pause for a moment to give thanks to one sorely underappreciated, seldom-considered auto part. We are referring to the humble but essential, mechanical water pump. Without it, the engines in our cars would quickly overheat and possibly grind to an ugly, costly halt.

Wonderfully clever as they are, mechanical water pumps do come at a cost. We're going to look at a different type of water pump, one that runs on electricity. The benefits of using one just might, ahem...shock you.

To understand why anyone would want an electric water pump, first you need to understand the purpose and drawbacks of a traditional, mechanical water pump. Technically, it's a coolant and anti-freeze pump, but we'll call it a water pump for short because that's how most auto technicians refer to it.

The traditional water pump is a belt-driven (or sometimes cam-driven) component. In other words, it takes mechanical, rotational energy from the engine -- provided in the form of a spinning rubber belt -- and uses it to drive an internal pump mechanism. An impeller in the pump sends engine coolant on a winding journey through the engine block to absorb heat, then on to the radiator, where the coolant sheds heat and then back through the pump again.

With its water pump running, a typical auto engine remains in the relatively comfortable neighborhood of about 200 degrees Fahrenheit (93.3 degrees Celsius) and everybody's happy, including your car. So why mess with such a good thing by throwing an electric-powered version into the mix?

Here's the thing: Any accessory that runs off of the energy of an engine belt is costing you. It either robs the vehicle of horsepower, fuel economy or both. You know how sluggish your vehicle gets and how your fuel mileage goes down when you drive with the air conditioning on? That's because the engine needs to work harder to power the belt-driven AC compressor and still maintain a constant speed. That same parasitic energy loss is going on all the time as far as your water pump is concerned.

An electric water pump doesn't need belt power. Instead, it runs on battery power. So, you might be wondering, since that pesky law of thermodynamics states that you can't create or destroy energy, aren't you just putting a bigger load on the (belt-driven) alternator, which provides energy to recharge the battery? Won't the energy losses have to be made up somewhere else and affect performance?

In a few words, not in a way that you'd notice. The law of thermodynamics does still hold true. However, mechanical water pumps spin all the time, at a speed proportional to engine speed. As a result, sometimes you're pumping lots of coolant when the engine isn't hot enough to actually need it. That's wasted energy. Sometimes your engine needs more cooling than it gets, like right when you shut your car off after hard driving on a hot day. That can wear out some engine components faster.

An electric water pump, conversely, allows the manufacturer to set (with much more precision) how much coolant courses through the engine at given temperature ranges. So it's actually more efficient and more in tune with your engine's specific cooling needs.

If there is one drawback to electric water pumps, it would be that they typically aren't as powerful as mechanical ones -- their lower flow rate means that they can't move as much coolant as quickly as the mechanical counterpart. Because of their potential for horsepower gains, electric water pumps have traditionally been marketed to people who race their cars (on a legally approved race track or road course, of course). Some people worry that they may not be durable enough for everyday driving in harsh conditions, while many users in sports car forums say they've already enjoyed long-term, worry-free performance. That's in addition to reported gains of anywhere from 3- to 10-horsepower.

If you're considering one, consult a trusted mechanic, check the warranty offered by the equipment's manufacturer and keep in mind you might void your vehicle's warranty by installing one.

Depending on how you drive, having an electric water pump could provide more ponies on tap when you need them, improve miles per gallon and possibly even extend your engine's life by reducing stress.

Knock on grounded chassis metal, I've never had a piece of clothing get caught by a running engine's accessory belt and have it suck me into the biting metal parts below. But lots of people have and suffered serious injury. The moment I first laid eyes on a running auto engine, at age three or four, I thought, "how beautiful...and dangerous!" Since then, I have skinned numerous knuckles and shouted many words unsuitable for this Web site in wrestling with aptly named serpentine belts. Later in your vehicle's life, belts can become a real pain. They crack. They fray. They glaze over and make embarrassing "skeeeeweee!!!" noises when you start your car. Mechanical water pumps use a belt. Mechanical water pumps themselves also break. I, for one, would not mind seeing the wholesale electrification of water pumps and other under-hood accessories as standard equipment. In fact, I predict that's exactly what we'll witness over the next decade or so. This was a fun article to write because it reminded me once again how cars are evolving into more intelligent, electrical machines in order to solve the limitations of pure mechanical approaches. Whether you love or hate the idea of all-electric cars, electrified cars are here to stay -- and the electric water pump is just one more reason why.

Did cars ever have external combustion engines?
How does engine placement affect handling?
How to Remove Engine Deposits