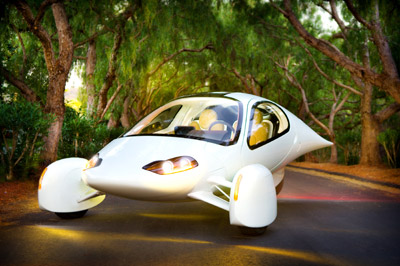 What if you could drive across the entire United States -- from East coast to West coast -- on just one tank of gas? Sounds like a crazy idea, right? Ever since Nicholas August Otto developed the gasoline engine in the 1870s and Rudolph Diesel invented the diesel engine in the 1890s, people have improved upon vehicle efficiency in fits and starts.

As concerns continue to grow over the possible consequences of global warming, nations and governments are beginning to react. The European Union continues to revise its strict emission standards, and ultracompact cars like the Smart Car, the MINI Cooper and the iQ Car catch lots of attention for their space- and energy-saving qualities. In the U.S., meanwhile, President George W. Bush signed an energy bill on Dec. 19, 2007, that encourages automakers to produce more fuel-efficient vehicles and increase the industry average to at least 35 miles per gallon by 2020.

While these are small steps toward a respectable goal, Aptera Motors, Inc., a private company based in San Diego, Calif., may be taking a big leap with the Aptera, a three-wheel, two-passenger prototype that aims for an astounding 300 miles per gallon. The company was founded in 2006 by Steve Fambro and Chris Anthony, two independent entrepreneurs with experience in everything from composites and biotechnology to aerodynamics and finance.

This combination of expertise led to the Aptera, a truly unique vehicle that looks like a cross between a dolphin and a helicopter. Technically classified as a motorcycle, the vehicle will only be available to residents of California when it's initially produced. If the Aptera sells well, AC hopes to offer its vehicle to national and international markets.

The initial prototype of the Aptera achieved 230 mpg, a number that is 195 mpg over the projected standard outlined in President Bush's recent energy bill. As of now, the developers still have more time to work out the kinks and improve its efficiency -- AC expects the Aptera to be ready for Californians in late 2008.

How fast will the Aptera go? Since it's technically a motorcycle, what are its safety features? Read on to learn more about the Aptera. 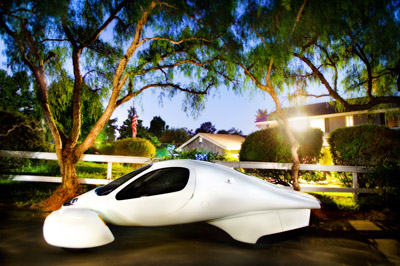 The Aptera will be available as an all-electric or a plug-in hybrid for under $30,000.
Accelerated Composites

So how can the Aptera get such great gas mileage? Several aspects of the vehicle's design give it high fuel-efficiency, but Aptera Motors' area of expertise lies in composites. You may hear the word sometimes when people talk about construction, but what exactly is a composite, and how does it help the Aptera?

A composite is a material that is made up of two or more different properties. Although these properties are easy to tell apart when combined and don't fuse together completely, they work together to form a substance that is strong, light and easy to shape. Composites can occur naturally in nature, or they can be man-made. A natural composite, for instance, is something as simple as wood, which is made of strong fibers of cellulose bound together by a light, weak substance called lignin. Concrete, on the other hand, is made by combining aggregate -- small stones and gravel -- and cement.

Sports car manufacturers use carbon fiber composites to build light, speedy yet powerful cars like the Aston Martin Rapide and the Lamborghini Reventon. Airplanes, cars, boats and insulation for buildings are made with fiberglass because of its great strength. The Aptera uses its own patented process called "Panelized Automated Composite Construction (PAC2)" for its body design, which gives the vehicle its unique, aerodynamic shape.

The Aptera was intended to operate on a diesel engine, but it became too difficult to build a small enough engine that would pass California's emissions testing. Instead, it will be available as either a pure electric vehicle or a plug-in hybrid. Top speed for the Aptera will exceed 85 mph and will most likely be limited electronically at 95 mph -- smaller, lightweight cars can't go too fast, especially on highways, because air resistance makes them unstable. If you throw a light paper airplane through the air with a bit too much force, you might get an idea of how easily air can alter its course. The same goes for a lightweight car traveling too fast down the road.

But the speed limitation isn't the only safety precaution AC has taken with the Aptera. 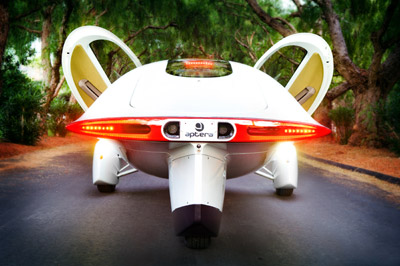 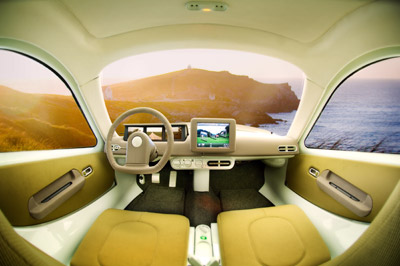 The outside structure isn't the only part of the Aptera that provides safety. As part of what Aptera Motors calls the "Eyes Forward" vision system, a video display is located in front of the driver, offering a 180-degree view behind the vehicle. As you can see from the pictures above, rear view sight is limited because of the Aptera's body design. The video display is necessary for safe driving conditions. A GPS system located on the center console provides further assurance, letting you know that you're at least heading in the right direction.

The Aptera is a "two plus one" concept -- two adults can fit comfortably in the driver and passenger seat, and a removable third seat is located in the back for infants. Removing that back seat allows enough room for 15 bags of groceries. If "two plus one" want to cruise around the California coast, though, do they have to wear helmets? Even though the Aptera is classified as a motorcycle, you don't need to wear a motorcycle helmet -- or obtain a motorcycle license, for that matter -- because the vehicle is enclosed. The Aptera's classification only makes things easier for California residents, actually, as drivers are permitted to use HOV lanes, even if there's only one person inside.

To learn more about the Aptera and other alternative automobiles, look over the links on the next page.