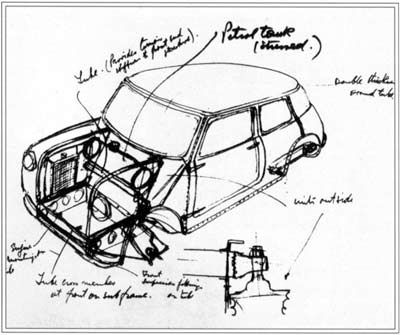 In the automotive world, manufacturers tend to develop a car model and then tweak it, re-inventing it every few years to reflect the changing needs and desires of the consumer market. Occasionally, a car model design comes along that somehow remains relatively untouched for decades. These cars can gather a loyal band of supporters and enthusiasts whose passion for the model might seem, to an outsider, to go well beyond the merits of the car itself. The fans shrug it off; they know they're backing the right horse.

In England, the Mini is just such a car. Like the Volkswagen Beetle, the Mini's design barely changed at all in the 40 years it was in production. Then, in 2000, the Mini transformed into the MINI Cooper, a car that promises to follow in the footsteps of the original Mini. In this article, we'll examine the history of this remarkable little machine. We'll look at how the MINI has evolved in a series of small changes and a couple of big transformations and we'll examine the culture that has sprung up around the car.

BMW's MINI Cooper can trace its history back to 1957, when Leonard Lord, president of the British Motor Corporation (BMC), decided to develop a reliable, efficient small car for consumers. At the time, Britain was in the middle of an oil crisis and fuel efficient cars became a necessity. Most of these cars had engines under 700cc (cubic centimeters) and were called microcars (also known as bubble cars). Most were produced in Germany, and were often difficult and unsafe to drive. Lord gave car designer Alec Issigonis the task of creating a British car that would fit in a box 10 feet long, 4 feet wide and 4 feet tall. In addition, the passenger space in the car had to comprise 60 percent of the length of the vehicle.

Issigonis and his team moved from concept to production in two years, an amazingly short development cycle for an entirely new concept car. The secret to the Mini's size was a revolutionary engine layout. Issigonis decided to create a transverse mounted engine, which means he designed the car so that the engine was mounted sideways. In addition, he mounted the engine in the front of the car, near the front two wheels. The front wheels drove the car and the additional weight in the front of the Mini gave the car more stability when taking tight turns. The space-saving engine layout allowed Issigonis to create a passenger compartment with more room than you'd expect for such a small car. You might even think it was larger on the inside than the outside.

The small car also featured a center-mounted speedometer, small wheels (positioned at the corners of the vehicle, giving it a "bulldog stance") and very few bells and whistles. Leonard Lord looked at the second generation of prototypes and decided to move the Mini into mass production. In August 1959, the first Minis rolled off the production lines and into the possession of British motorists.

In 1961, a race car builder named John Cooper approached BMC with the intention of altering a Mini into a viable race car. Issigonis objected; he felt that the Mini should be thought of as the everyman car. Cooper decided to go over Issigonis' head and received the blessings of BMC. The result of the partnership was the first Mini Cooper, a car that won multiple races, including three victories at the Monte Carlo Rally. In 1963, Cooper made further alterations to the engine and body design. He called his new turbocharged design the Mini Cooper S.

Beginning in 1960, the BMC sold Minis to the U.S. market. Between 1960 and 1967, approximately 10,000 Minis were sold in the United States. Though BMC was encouraged by consumer response, rising standards in emissions forced BMC to end shipments. BMC determined that the cost of altering the Mini's engine was too great, and the United States would not see new Minis available for purchase until 2002.

In the United States, cars that are older than 25 years are exempt from emissions regulations. Finding any car of that age in good working order presents quite a challenge. Some unscrupulous enthusiasts have been known to take the vehicle identification number (VIN) plates from older Minis and place them on Minis that are not yet 25 years old. They claim that the original car was repaired so extensively that the only original part left is the VIN plate (this is known in philosophical circles as the Theseus Paradox).