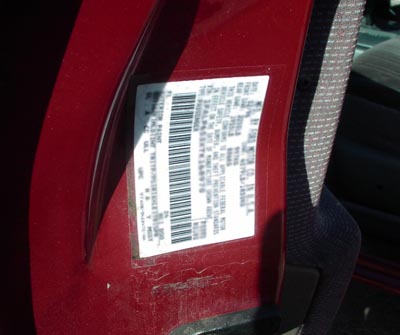 This vehicle has the VIN on the inside of the driver's side door.
Image courtesy Ed Grabianowski

Vehicle Identification Numbers (VINs) are unique identification sequences on every car manufactured in the United States and many other countries. These numbers are sort of like a fingerprint for a car. They help to keep track of problems, ownership changes, and deter theft. In this article, we'll find out where to find your car's VIN, what the numbers mean and how you can use VINs to help prevent theft or learn about the history of a used car.

A VIN is a 17-character sequence containing both numbers and letters. It is affixed to every car, truck or trailer made in the United States after 1981. No two cars built within 30 years of each other can have the same VIN. The Motor Vehicle Records database tracks information on a VIN, such as when the car was inspected, when it changed ownership and if it was involved in a serious crash, rollover or flood.

In 1987, the Department of Transportation's Motor Vehicle Theft Prevention Standard required manufacturers to also put the VIN on the major parts (like engines, hoods and fenders) of certain vehicles if the car is considered "high theft" [ref].

On most cars, you can find the VIN on the dashboard on the driver's side, and it's visible through the windshield from outside the car. It is usually on a sticker or plate on the inside of the driver's side door or on the frame sill where the door closes. The VIN is sometimes printed inside the glove compartment, and it's usually on the car's title and/or on insurance documents.

The United States Department of Transportation created a consistent, unified VIN system in 1981. Specifically, it included the VIN system in the Code of Federal Regulations, Title 49, Chapter V, Part 565 [ref]. Prior to 1981, auto manufacturers used their own numbering system to stamp cars with unique IDs. The VIN system conforms to a standard developed by the International Organization for Standardization in 1977: ISO 3779. Manufacturers use all letters and numbers, with the exception of the letters I, O and Q.

Each character in a VIN has a specific meaning, and the VIN is broken up into sections. The first section identifies the manufacturer of the vehicle, and uses the first three digits:

The next five digits, four through eight, describe the vehicle. The specific use of these digits differs from one manufacturer to another. Here is an example that includes common code elements:

Digits four through eight might also be coded for information on the transmission used, the grade of the car (i.e., Accord LX, DX, Si), or other features such as safety belts and air bags.

The next three digits are consistent among all manufacturers:

Since each manufacturer has a different code, and each car produced by the same factory has its own production sequence number, every car produced in a given year has a unique VIN.

The European Union has a similar regulation for VINs, but it is less stringent than the North American rule. European VINs are not required to include year, factory or vehicle attribute data. However, the two systems are compatible. While most countries have some form of VIN system that is compatible with the North American system, cars that are imported must have their VIN number entered into the MVR database along with enough information to explain what the codes are if the original VIN system differs from the ISO 3779 standard.

The check digit for a VIN is obtained through a number of mathematical steps. Each letter used in a VIN has a corresponding number value, while numbers stay the same. Therefore, the VIN becomes a string of 17 numbers (with a space in the ninth position, where the check digit goes). Each position in the VIN has a weight -- the number of times that digit is multiplied.

What Can You Do With a VIN? 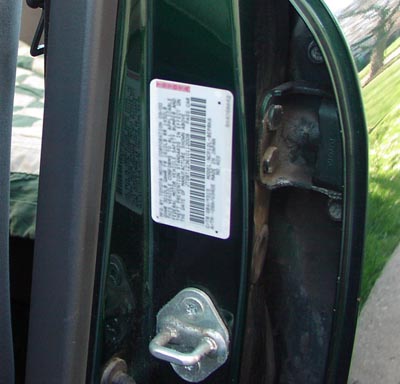 Most cars have VINs on a sticker or plate inside the driver door sill, but police must obtain a search warrant to view it.
Image courtesy Ed Grabianowski

A VIN isn't just a way to mark and identify cars. You can use the VIN in a number of ways. Most people use a VIN when they are thinking of purchasing a used car. For a fee, commercial services allow you to enter a VIN and see the records on that car in the MVR database. These records will show you how many owners the car has had, when it was last inspected, if it was ever classified as a "lemon," if it is a stolen car, or if it has ever gone through a major incident such as rolling over or being submerged in water. A good mechanic can spot many of these problems as well. A VIN check can also reveal if the car's odometer has ever been rolled back, or if it has flipped (reached the maximum miles on the gauge and rolled back over to zero).

VINs help deter car thieves, because they make it more difficult to resell the car. If someone checks the VIN, it will show that it the car was stolen, unless the thieves have altered it in some way. But it isn't especially difficult for car thieves to alter VINs. They frequently switch VINs, replacing the VIN in a stolen car with another car that they bought legally. Police use the VIN as a positive ID when looking for stolen cars, but thieves often cover up the dashboard VIN. An officer can't enter the car to see the door sill VIN plate without a search warrant.

VIN etching creates another level of protection. A weak acid application etches the VIN into the windshield and other windows of the car. This helps deter theft for several reasons. Thieves can't get rid of the etched VIN without replacing the windshield, which is so expensive that it can make stealing and reselling that car unprofitable. It's also much more difficult to cover up all the VIN etchings, so if a car is stolen, police can just read the etched VIN off of the window. Several companies sell kits that include a template with your vehicle's VIN and acid for about $20. Auto dealers and collision shops offer etching service as well, but it tends to cost more.

For lots more information on VINs and related subjects, check out the links on the next page.

Car thieves have come up with many ways to get around VINs when it comes to stealing and dealing cars. One method is to strip a car of all parts and abandon it. Once the insurance company writes the car off as totaled, it sells the car at auction. The thief then buys the car back at a very low price, quickly rebuilds it with the original parts, and then registers the car legally, VIN included.

Some thieves steal VIN plates from legal cars. The owner doesn't usually notice -- who checks their VIN on a regular basis? They then attach the stolen VIN plate to a stolen car. An alternative method is to buy a wrecked car from a salvage yard and use that car's VIN plate. In many of these cases, the VIN probably won't match the exact type of car and year of production if anyone checks, but thieves can usually find one that's close enough. Since most buyers don't check the VIN, the thief can make the sale and disappear long before anyone notices anything suspicious about the car.