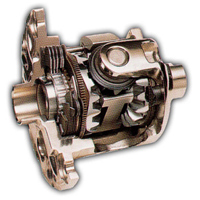 The differential has three jobs:

In this article, you'll learn why your car needs a differential, how it works and what its shortcomings are. We'll also look at several types of positraction, also known as limited slip differentials.

Why You Need a Differential

For the non-driven wheels on your car -- the front wheels on a rear-wheel drive car, the back wheels on a front-wheel drive car -- this is not an issue. There is no connection between them, so they spin independently. But the driven wheels are linked together so that a single engine and transmission can turn both wheels. If your car did not have a differential, the wheels would have to be locked together, forced to spin at the same speed. This would make turning difficult and hard on your car: For the car to be able to turn, one tire would have to slip. With modern tires and concrete roads, a great deal of force is required to make a tire slip. That force would have to be transmitted through the axle from one wheel to another, putting a heavy strain on the axle components.