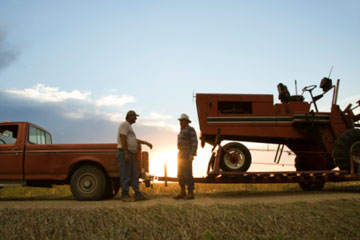 Horsepower and torque are closely related, yet they stand for two different aspects of work. See pictures of engines.
Thinkstock Images/Comstock Images/Getty Images

Most commercials you see for big trucks advertise the impressive amount of horsepower and torque the engine provides. It seems, as usual, the bigger the numbers, the better. But what do those numbers mean, and how are the two concepts related?

Engine horsepower is measured using a dynamometer. The dynamometer places a load on the engine and measures the twisting force the engine crankshaft places against the load. The load is usually a brake preventing the wheels from spinning.

What the dynamometer is really doing, however, is measuring the torque output of the engine. In a vehicle, torque is measured at various engine speeds, or revolutions per minute (RPM). These two numbers are fed into a formula -- torque times RPM divided by 5,252 -- to arrive at horsepower. The Society of Automotive Engineers has two standards for determining horsepower: net and gross. Gross horsepower removes most loads from the engine, including emission controls, before testing. Net horsepower is what's found by testing the same kind of stock vehicle you'd find at the showroom, and that's the measurement now used in advertising and manufacturer literature.

Horsepower is determined from torque because torque is easier to measure. Torque is defined specifically as a rotating force that may or may not result in motion. It's measured as the amount of force multiplied by the length of the lever through which it acts. For example, if you use a one-foot-long wrench to apply 10 pounds of force to a bolt head, you're generating 10-pound-feet of torque.

Torque, as mentioned above, can be generated without moving an object. However, when it does move an object, it then becomes "work," and this is what most people think of when they think of torque (usually in terms of towing). The more torque produced by an engine, the more work potential it has.

Read on for more about the relationship between horsepower and torque.

The Relationship Between Torque and Horsepower

Torque and horsepower play an integral role in the automotive market. The numbers are emphasized as ways of illustrating what a car or truck can do. In reality, the numbers play a more complex role than most consumers realize. More importantly, how the numbers function in the real world of driving and hauling is defined by how a vehicle's design allows the two concepts to work together.

Remember, torque is the base number for work, and power is the rate of doing more work. The gear system, for instance, can affect how work within the engine occurs: A pickup truck can have a low gear to channel more amount of torque into a specific application, like towing very heavy loads. However, if the same gearing is used on Saturn SL1 versus a RAM 1500, the RAM will always be able to tow more because of the difference in horsepower produced. The more horsepower produced, the more torque potential there is from the engine.

But that's just what it is -- potential. Torque potential is translated to real-world applications through the vehicle's transmission and axles, specifically the axle differentials. The way these units are geared determines how the horsepower is translated to torque.

To understand this, think of the difference between a race car and a tractor. The race car develops an enormous amount of horsepower, but the torque is used for speed through gearing. There's not a lot of work needed, in a relative sense, to push a race car forward, so less work is accomplished, leaving more power for speed.

A tractor, on the other hand, may have the same size engine producing the same amount of horsepower. That horsepower is harnessed for doing work through gearing. The tractor can't reach high speeds, but it can pull and push huge amounts of weight.

Next time you see a vehicle advertised on television, think about what it means when they talk about horsepower and torque. There's a relationship between the two -- they can't exist without each other, but they stand for very different aspects of making a car or truck work.