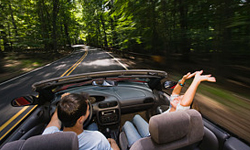 These new engine technologies are ensuring that the future of driving will still be fun.
Comstock Images/Getty Images

There are people who see the rising corporate average fuel economy (CAFE) standards -- 54.5 miles per gallon (23.2 kilometers per liter) by 2025 -- as bad news. They bemoan the death of the big engines, the V-8s that delivered lots of power and sucked up a lot of gas. They say that driving won't be fun anymore, that we'll all be forced to buy dull cars with high fuel economy scores. Booooring, these people say.

Then there are others who have known the CAFE standards would have to rise, given the price of oil, U.S. dependency on foreign oil and the effects of engine emissions on climate change. They saw the higher fuel economy requirements as a challenge, and they began to work on new technologies that would be good for the planet, good for our wallets and still cool. These people are called engineers.

Here are five engine technologies available today or in the very near future, at a variety of price points. These examples -- and there are more like them being invented every day -- promise that the future of driving will still be fun, whether it's in a tiny city car with a direct-injected engine or a supercar with a "push to pass" hybrid booster button.