­Since the invention of the internal com­bustion engine, automotive engineers, speed junkies and racecar designers have been searching for ways to boost its power. ­One way to add power is to build a bigger engine. But bigger engines, which weigh more and cost more to build and maintain, are not always better.

Another way to add power is to make a normal-sized engine more efficient. You can accomplish this by forcing more air into the combustion chamber. More air means more fuel can be added, and more fuel means a bigger explosion and greater horsepower. Adding a supercharger is a great way to achieve forced air induction. In this article, we'll explain what superchargers are, how they work and how they compare to turbochargers.

A supercharger is any device that pressurizes the air intake to above atmospheric pressure. Both superchargers and turbochargers do this. In fact, the term "turbocharger" is a shortened version of "turbo-supercharger," its official name.

In the next section, we'll look at how a supercharger does its job.

A basic engine with the addition of a supercharger.

An ordinary four-stroke engine dedicates one stroke to the process of air intake. There are three steps in this process:

Once air is drawn into the engine, it must be combined with fuel to form the charge -- a packet of potential energy that can be turned into useful kinetic energy through a chemical reaction known as combustion. The spark plug initiates this chemical reaction by igniting the charge. As the fuel undergoes oxidation, a great deal of energy is released. The force of this explosion, concentrated above the cylinder head, drives the piston down and creates a reciprocating motion that is eventually transferred to the wheels.

Getting more fuel into the charge would make for a more powerful explosion. But you can't simply pump more fuel into the engine because an exact amount of oxygen is required to burn a given amount of fuel. This chemically correct mixture -- 14 parts air to one part fuel -- is essential for an engine to operate efficiently. The bottom line: To put in more fuel, you have to put in more air.

That's the job of the supercharger. Superchargers increase intake by compressing air above atmospheric pressure, without creating a vacuum. This forces more air into the engine, providing a "boost." With the additional air in the boost, more fuel can be added to the charge, and the power of the engine is increased. Supercharging adds an average of 46 percent more horsepower and 31 percent more torque. In high-altitude situations, where engine performance deteriorates because the air has low density and pressure, a supercharger delivers higher-pressure air to the engine so it can operate optimally.

Unlike turbochargers, which use the exhaust gases created by combustion to power the compressor, superchargers draw their power directly from the crankshaft. Most are driven by an accessory belt, which wraps around a pulley that is connected to a drive gear. The drive gear, in turn, rotates the compressor gear. The rotor of the compressor can come in various designs, but its job is to draw air in, squeeze the air into a smaller space and discharge it into the intake manifold. 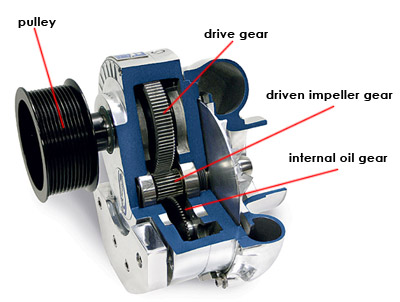 To pressurize the air, a supercharger must spin rapidly -- more rapidly than the engine itself. Making the drive gear larger than the compressor gear causes the compressor to spin faster. Superchargers can spin at speeds as high as 50,000 to 65,000 rotations per minute (RPM).

As the air is compressed, it gets hotter, which means that it loses its density and can not expand as much during the explosion. This means that it can't create as much power when it's ignited by the spark plug. For a supercharger to work at peak efficiency, the compressed air exiting the discharge unit must be cooled before it enters the intake manifold. The intercooler is responsible for this cooling process. Intercoolers come in two basic designs: air-to-air intercoolers and air-to-water intercoolers. Both work just like a radiator, with cooler air or water sent through a system of pipes or tubes. As the hot air exiting the supercharger encounters the cooler pipes, it also cools down. The reduction in air temperature increases the density of the air, which makes for a denser charge entering the combustion chamber.

Next, we'll look at the different types of superchargers.

There are three types of superchargers: Roots, twin-screw and centrifugal. The main difference is how they move air to the intake manifold of the engine. Roots and twin-screw superchargers use different types of meshing lobes, and a centrifugal supercharger uses an impeller, which draws air in. Although all of these designs provide a boost, they differ considerably in their efficiency. Each type of supercharger is available in different sizes, depending on whether you just want to give your car a boost or compete in a race.

As the meshing lobes spin, air trapped in the pockets between the lobes is carried between the fill side and the discharge side. Large quantities of air move into the intake manifold and "stack up" to create positive pressure. For this reason, Roots superchargers are really nothing more than air blowers, and the term "blower" is still often used to describe all superchargers.

Roots superchargers are usually large and sit on top of the engine. They are popular in muscle cars and hot rods because they stick out of the hood of the car. However, they are the least efficient supercharger for two reasons: They add more weight to the vehicle and they move air in discrete bursts instead of in a smooth and continuous flow.

This makes twin-screw superchargers more efficient, but they cost more because the screw-type rotors require more precision in the manufacturing process. Some types of twin-screw superchargers sit above the engine like the Roots supercharger. They also make a lot of noise. The compressed air exiting the discharge outlet creates a whine or whistle that must be subdued with noise suppression techniques.

A centrifugal supercharger powers an impeller -- a device similar to a rotor -- at very high speeds to quickly draw air into a small compressor housing. Impeller speeds can reach 50,000 to 60,000 RPM. As the air is drawn in at the hub of the impeller, centrifugal force causes it to radiate outward. The air leaves the impeller at high speed, but low pressure. A diffuser -- a set of stationary vanes that surround the impeller -- converts the high-speed, low-pressure air to low-speed, high-pressure air. Air molecules slow down when they hit the vanes, which reduces the velocity of the airflow and increases pressure.

Centrifugal superchargers are the most efficient and the most common of all forced induction systems. They are small, lightweight and attach to the front of the engine instead of the top. They also make a distinctive whine as the engine revs up -- a quality that may turn heads out on the street.

Photos courtesy HowStuffWorks Shopper
Both the Monte Carlo and the Mini-Cooper S are available with superchargers.

Any of these superchargers can be added to a vehicle as an after-market enhancement. Several companies offer kits that come with all of the parts necessary to install a supercharger as a do-it-yourself project. In the world of funny cars and fuel racers, such customization is an integral part of the sport. Several auto manufacturers also include superchargers in their production models.

Next, we'll learn about the advantages of supercharging your car.

The biggest advantage of having a supercharger is the increased horsepower. Attach a supercharger to an otherwise normal car or truck, and it will behave like a vehicle with a larger, more powerful engine.

But what if someone is trying to decide between a supercharger and a turbocharger? This question is hotly debated by auto engineers and car enthusiasts, but in general, superchargers offer a few advantages over turbochargers.

Installing a turbocharger requires extensive modification of the exhaust system, but superchargers can be bolted to the top or side of the engine. That makes them cheaper to install and easier to service and maintain. 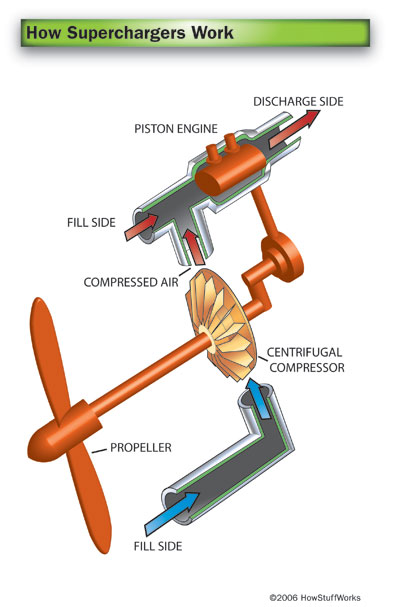 The basic setup for an airplane with a centrifugal supercharger, or compressor.

Finally, no special shutdown procedure is required with superchargers. Because they are not lubricated by engine oil, they can be shut down normally. Turbochargers must idle for about 30 seconds or so prior to shutdown so the lubricating oil has a chance to cool down. With that said, a good warm-up is important for superchargers, as they work most efficiently at normal operating temperatures.

Superchargers are common additions to the internal combustion engines of airplanes. This makes sense when you consider that airplanes spend most of their time at high altitudes, where significantly less oxygen is available for combustion. With the introduction of superchargers, airplanes were able to fly higher without losing engine performance.

Superchargers used with aircraft engines work just like those found in cars. They draw their power directly from the engine and use a compressor to blow pressurized air into the combustion chamber. The illustration above shows the basic setup for a supercharged airplane.

We'll learn about some disadvantages of superchargers next.

The biggest disadvantage of superchargers is also their defining characteristic: Because the crankshaft drives them, they must steal some of the engine's horsepower. A supercharger can consume as much as 20 percent of an engine's total power output. But because a supercharger can generate as much as 46 percent additional horsepower, most think the trade-off is worth it.

Supercharging puts an added strain on the engine, which needs to be strong to handle the extra boost and bigger explosions. Most manufacturers account for this by specifying heavy-duty components when they design an engine intended for supercharged use. This makes the vehicle more expensive. Superchargers also cost more to maintain, and most manufacturers suggest high-octane premium-grade gas.

Despite their disadvantages, superchargers are still the most cost-effective way to increase horsepower. Superchargers can result in power increases of 50 to 100 percent, making them great for racing, towing heavy loads or just adding excitement to the typical driving experience.

To learn more about superchargers and related topics, check out the links on the next page.

How does a supercharger work?

A supercharger pressurizes the air intake to above atmospheric pressure. It's similar to a turbocharger, but a supercharger is powered mechanically by a belt- or chain-drive from the engine's crankshaft.

What is the difference between supercharger and turbocharger?

A supercharger can boost a vehicle's engine output between 30 and 50 percent, but it results in a 46 percent increase on average. So, you can expect to see your horsepower to increase accordingly.

How much faster does a supercharger make your car?

A supercharger won't necessarily make your car faster, but it can benefit acceleration.

Are superchargers worth the money?

Superchargers do have advantages. They can increase your engine's horsepower, and they can make your vehicle perform like it has a larger, more powerful engine under the hood. But there are disadvantages too, like increased output consumption and added engine strain.