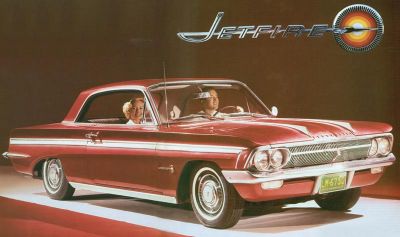 When introduced in 1961, the Oldsmobile F-85 Jetfire was the carmaker's entry in the rapidly growing market for economical compact cars. See more classic car pictures.

The stage was set for the development of the Oldsmobile F-85 Jetfire at the start of the 1960s. Like a beach pounded by heavy surf, the U.S. auto industry was in the path of a couple of forceful waves.

For one thing, the postwar emphasis on horsepower was bearing down to make its biggest splash yet in what would soon come to be known as muscle cars. For another, American showrooms were about to be awash in compacts, economical in size and power, inspired by a rising tide of small imports.

Just as breakers rise separately from the same ocean, these two forceful waves -- each with an energy of its own -- could still flow together. Oldsmobile would be among the carmakers that tried to reconcile these seemingly different friends. True to its history, it would do so by turning to some advanced technology.

Olds had won a reputation for itself at General Motors by leading the way in engineering breakthroughs, such as Hydra-Matric automatic transmission, first seen on the 1940 models, and the modern high compression Rocket ohv V-8 engine that debuted in 1949. Both were at the leading edge of the swing toward driving ease and abundant power that arose in the 1950s and showed no signs of abating anytime soon.

But there was an undercurrent that ran counter to the trend. Throughout the 1950s, a growing number of American motorists had drifted over to a host of small cars, most of them European. Some admired these cars purely for their economy. Others, though, discovered a nimble sporting, "fun-to-drive " character that just couldn't be had with 18 feet of fins and chrome.

When U.S. automakers decided to wade into the compact market, some of them wanted to make cars to court the latter group of customers. Oldsmobile's solution was a light, small V-8 fitted with a turbocharger to give it the performance of a heavier, larger-displacement engine.

The platform for this powerplant was Oldsmobile's unibodied F-85, introduced for 1961 as one of GM's upscale "senior" compacts (though billed as "intermediate" in size, on a 112-inch wheelbase). Related to the Buick Special and Pontiac Tempest, it was equipped with an all-aluminum, 215-cid "Rockette" V-8, a GM Engineering design refined for production by Buick and Oldsmobile engineers.

In stock form, it produced 155 bhp; an optional version with four-barrel carburetion and 10.25:1 compression yielded 185 bhp. Get more details on the Jetfire's turbocharger in the next section of this article.