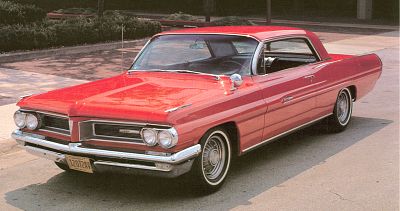 In creating the Grand Prix, Bunkie took his cue from the high success of Ford's post-1957 four-seat Thunderbirds. The idea was simplicity itself: a Catalina hardtop coupe with unique styling touches and a T-Bird-type buckets-and-console interior. Interestingly, the new model was conceived for the Ventura nameplate, and it effectively replaced that slow-selling Catalina-based series. But Grand Prix was an inspired choice, with its heroic images of Formula 1 competition -- and, of course, its literal French meaning, "great prize."

Differences from the parent Catalina were quite modest: slightly revised grille; dummy back-panel grillework; the Catalina's optional front bucket seats as standard; and a shiny center console with tachometer, gauge package, and monochrome color scheme inside and out. But the whole was far greater than the sum of these parts. As Motor Trend stated: "Style-wise and price-wise [the Grand Prix] competes directly with the Thunderbird. Performance-wise, it's in a class by itself."

True enough. There were no fewer than five versions of Pontiac's superb Trophy 389 V-8, from a 230-horsepower economy special to a high-compression Tri-Power job (three two-barrel carburetors) with a hefty 348 blip. Speaking of heft, less weight and more available power gave the GP a decided performance edge on the Thunderbird. MT reported 0-60 mph taking a brief eight seconds.

Three-speed manual shift was standard, but most GPs were ordered with "Roto" Hydra-Matic, a new three-speed torque-converter automatic shared with Catalina, priced at $231. For the same money, confirmed leadfoots could specify four-speed manual floorshift, as well as seven different axle ratios. 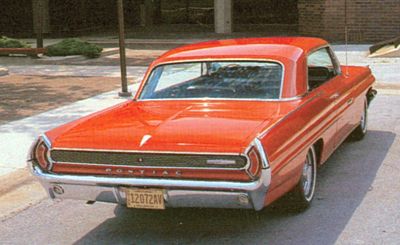 Sales for the 1962-1964 Pontiac Grand Prix varied by year. The 1962 Pontiac Grand Prix was a so-so seller. It wasn't that cheap at nearly $3,600, and it cost little less than a T-Bird when optioned to match. GP did best Oldsmobile's comparably priced Starfire, but trailed Thunderbird by 2-to-l.

Of course, no car is perfect and neither was the '63 GP. Suspension remained a bit soft, the Hydra-Matic was still plagued by excess slippage, the console-mounted vacuum gauge (replacing the '62 tach) was so hard to see as to be virtually useless, and a new "Cordova" vinyl roof covering was a questionable use of $86.08. But heavy-duty suspension was optional, too, along with Pontiac's handsome multi-spoke aluminum wheels ($122.13), and the performance and styling were all anyone could want. As a result, nearly 250 percent more buyers wanted Grand Prix in '63, a high-water mark that wouldn't be duplicated for another six years.

But this winning design wouldn't last long. The '64 was basically the '63 with a modest facelift and minor mechanical upgrades. After that, all full-size Pontiacs swelled to hippy, heroic new proportions. Not until 1969 would Grand Prix again offer the sort of manageable sports-luxury it had in the beginning, which explains why the 1962-64 models are now so coveted as collector cars. They were, and are, some of Pontiac's best.

The 1962-1964 Pontiac Grand Prix's performance was a major part of its appeal. Get the Grand Prix's specifications on the next page.

The 1962-1964 Pontiac Grand Prix came with a wide range of engine options.