The styling of the 1961 Cadillac continued with the 1962 models. See more pictures of Cadillacs.

The development of the 1961 Cadillac actually began about a decade earlier. One day in the early 1950s, William Mitchell took an aspiring young CM truck designer aside and told him, "If you ever want to amount to anything around here, you better start designing cars." As much as Chuck Jordan loved trucks, he could see that his boss was right.

"Okay then," recalls Jordan, who retired from the General Motors design vice presidency in 1992, "I said to myself: Harley Earl started out with Cadillac and Bill Mitchell took over the Cadillac studio in 1936, so Cadillac definitely looked like the place to be." It was a plan that bore fruit in October 1957 when Earl, the founder of General Motors' styling section, named Jordan chief designer for Cadillac.

In those days "Standard of the World" wasn't just a slogan. Cadillac truly did set the standard: in desirability, in quality, prestige, engineering, and, most importantly, in styling. Living under "The Penalty of Leadership" Cadillac had imposed on itself in a World War I-era advertisement meant the division could never rest. It had to keep forging ahead, pushing, with every move calculated to lead the industry.

"If you were in there designing Cadillacs, that was a big thing," says Jordan. "Cadillac was the prestige studio, and I wanted to be sure what we did was significant. The 1959 model was almost finished when I took over as chief designer. The studio had a 14-member team: designers, modelers, and technical people. We got comfortable with each other as we face-lifted the 1960 Cadillac, so we were ready when it came time to start on the 1961."

Nearly everybody in the Cadillac studio was young and dedicated. In early 1958, when the 1961 project started, Jordan was 31. His assistant, David R. Holls, was 27, and the rest of the team was equally youthful.

The 1961 Cadillac might have been Jordan's first as a studio head, but it was also one of the last designs Harley Earl had a hand in. Today, we tend to remember General Motors' overstuffed, over-chromed, slow-selling 1958 models as Earl's last hurrah as styling czar, but they weren't.

He still had absolute control during the creation of the 1959-1960 Cadillac Eldorado Brougham -- the second-generation Brougham designed in the United States but handcrafted by Pininfarina in Italy -- and Earl remained in charge throughout a crucial period of the 1961 Cadillac program prior to his retirement on December 1, 1958, whereupon Mitchell took over as General Motors' design vice president.

Earl was more interested in the 1959-1960 Eldorado Brougham as a theme-setter for the 1961 Cadillac than for its own sake. The individual behind the 1959-1960 Brougham's styling was Holls, who also did the high-finned regular-production 1959 Cadillacs.

To read more about the design of the 1961 Cadillac, continue to the next page. 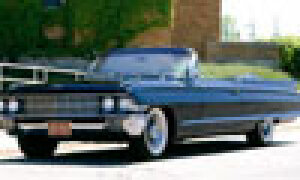