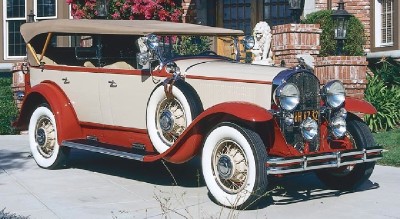 The 1931 Buick Phaeton boasted one of the most advanced engines of the time.

David Dunbar Buick was a canny Scottish industrialist but an unlikely auto builder. After making his mark with a process for annealing porcelain to steel for bathtubs, he turned to the profit opportunities of the horseless-carriage phenomenon. His first car, appearing in 1903, was a simple little chain-drive runabout with flat-twin power. One engine feature, overhead valves, was a rarity then, but has been a hallmark of almost all Buicks since.

In 1904, Buick moved from Detroit to Flint, Michigan, where it soon came under the control of William C. Durant. Buick prospered, and in 1908 Durant formed General Motors with Buick as its foundation and chief source of revenue. Six-cylinder engines arrived in 1914, and were the only type Buick offered from 1925 to '30. By that point, Buick buyers were mostly upper middle-class professional types who'd moved up from a Chevrolet, Oakland, or Oldsmobile -- hence the "doctor's car" sobriquet of the make's early years.

The Depression considerably reduced the size of this clientele -- and Buick sales -- but the division would bounce back strongly, reaching fourth in industry production for model-year 1938 (from a decade-low seventh in 1934-36).

The decision to offer costlier eight-cylinder cars came before the Wall Street crash, so Buick's sales problems in the early '30s, stemmed mainly from bad timing. At least the 1930 line corrected the bulged "pregnant" beltline styling that had been decidedly unpopular in 1929.

Buicks were conventional cars, arrayed in three series: the low-priced "40" on a 118-inch wheelbase, the midrange "50" on a 124-inch span, and the deluxe "60" on a 132-inch chassis. All carried "valve-in-head" sixes, the last six-cylinder engines at Buick until the 1960s. The 40 used a 257.5-cubic-incher with 81 horsepower, the 50 and 60 a 331.3-cid engine with 99 bhp. The 50 offered just four-door sedan and four-place sport coupe; 40 and 60 listed a full range of models, some quite scarce (only 836 seven-seat Series 60 limousines, for instance). Despite the deepening Depression, Buick finished third in industry production for the model year, mainly because competitors fared far worse.

For 1931 came an expanded lineup powered by the first Buick eights, among the most-advanced engines of their day: smooth and reliable five-main-bearing units designed by division chief engineer F.A. Bower. They included a 77-bhp 220.7 for the 50, now the least-costly Buick; a 272.6 with 90 bhp for the 60, the new midranger; and a 104-bhp 344.8-cid engine for new top-echelon Series 80 and 90.

Straight eights would be Buick's mainstay for the next 22 years. The new 1931 engine proved its mettle at that year's Indianapolis 500 by powering a racer that Phil Shafer qualified at 105.1 mph; for the race he averaged 86.4 mph. Any '31 Buick was quick in showroom tune; 10-60 mph took about 25 seconds, quite speedy for the day, and 90 mph was possible.

The big news for 1932 was "Silent Second SynchroMesh" transmission, plus more horsepower for all engines. Power and most wheelbases went up again for 1933, but sales did not. As a partial consequence, Harlow H. Curtice was appointed Buick president in October that year.

From classic cars to modern marvels, we've got your Buick info covered. Check out these sites for more on the American Buick.