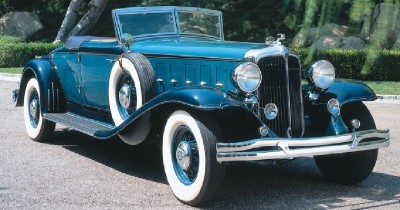 The 1932 Chrysler Imperial was a response to Cadillac, wisely avoiding the

Walter Percy Chrysler honed his native mechanical skills on the great Midwestern railroads, then learned about cars by tinkering with a $5000 Locomobile he bought in 1908. Within a few years he became plant manager at Buick under Charles W. Nash, then took over for him as Buick president. But Chrysler didn't get along with GM's Billy Durant, so he left to run his own car company (as did Nash).

After being hired to straighten out faltering Maxwell/Chalmers, Chrysler acquired control of the company by 1924, the year he introduced a new car under his own name. Thus was born the last of America's "Big Three" automakers (though it wasn't formally incorporated until 1925).

That first Chrysler was the foundation of the company's early success. It was designed with instrumental assistance from three superb engineers: Fred Zeder, Carl Breer, and Owen Skelton, the "Three Musketeers" who would dominate the design of Chrysler Corporation products throughout the '30s.

Power came from a high-compression 202-cubic-inch L-head six with seven main bearings and 68 brake horse­power -- 0.3 bhp per cubic inch, outstanding for the day. Also featured were four-wheel hydraulic brakes (well ahead of most rivals), full-pressure lubrication, attractive styling, and competitive prices around $1500. It couldn't miss, and it didn't. By 1927, production was up from 32,000 to some 182,000.

Sixes remained Chrysler's mainstay through 1930, when the make offered four different engines ranging from 195.6 to 309.3 cid. The smallest was the four-main-bearing job in the cheap CJ-Series; the others were derived from the original 1924 design. That year's lineup comprised no fewer than 38 models priced from $795 for the least-costly CJ to $3000-plus for the imposing Imperial.

The Chrysler line then moved rapidly upmarket in price, prestige, and power. The reason was the company's 1928 expansion via the acquisition of Dodge and introduction of DeSoto and Plymouth. Given his GM experience, it's no surprise that Walter Chrysler wanted a similar make "ladder" running from low-priced Plymouths to premium Chryslers to keep customers in his corporate camp. At first, DeSoto, not Dodge, was the step up from Plymouth; their price positions wouldn't be reversed until the mid-'30s.

Imperial had arrived in 1926 to answer Cadillac, though this would always be more of a prestige leader than high money-earner. Also unlike GM's luxury make, Imperials built through 1954 weren't the products of a separate division, just the finest Chryslers, though they usually rivaled Cadillac in most every way. A notable exception is that Imperial didn't try to match Cadillac's costly V-12 and V-16 engines of the '30s -- wise, considering how poorly those sold in the devastated Depression market.

Imperial reached a pinnacle in 1931, when Chrysler introduced its first eights. The largest was naturally reserved for Imperial: a smooth, low-revving 385-cid L-head with nine main bearings and 125 bhp. Despite weighing nearly 5000 pounds, these majestic cars could reach 96 mph and do 0-60 mph in 20 seconds. Styling (heavily influenced by the Cord L-29), was distinctive: long and low, with gracefully curved fenders and a rakish grille.

Hard times made sales scarce, but these Imperials provided glorious motoring at relatively modest prices. They remain among the most beautiful Chryslers ever built -- particularly the custom-bodied examples from the likes of Locke, Derham, Murphy, Waterhouse, and especially LeBaron. Though most coachbuilders perished in the Depression, Chrysler hired Ray Dietrich, one of the partners in LeBaron, to head its styling department (such as it was) in the late '30s.

Meantime, Chrysler cemented its reputation for advanced engineering with the 1931 debut of "Floating Power" rubber engine mounts. They were standard on all models, as were automatic spark control, free-wheeling, and rustproofed bodies. Welded steel bodies were an innovation from the previous year. To prove their strength, Chrysler persuaded a five-ton elephant to climb atop a sedan at Coney Island in one of the firm's many famous period publicity stunts. Fortunately, the body held.

Chrysler also offered an optional four-speed manual transmission, basically a three-speed unit with an extra-low first gear. But hardly anyone used "emergency low," so this was dropped after 1933. Interiors were lavish during these years, especially on Imperials and Chrysler Eights, which came with full instrumentation in a polished walnut panel.

Percy Chrysler laid the foundation for his namesake car company with an eponymous model in 1924. Check out these sites for more on Chrysler.