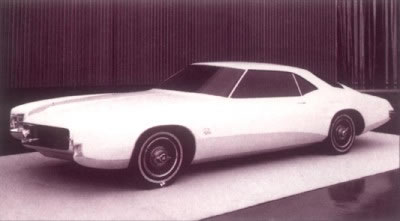 Design continuity was a factor in the development of the 1966 Buick Riviera. It exhibits the 1963-1965 look, but in a sleeker, more exaggerated form. See more classic car pictures.
2007 Publications International, Ltd.

In 1966, General Motors wanted the 1966 Buick Riviera to share front-wheel-drive technology with the 1966 Toronado and 1967 Eldorado. But problems cropped up during early testing of front-drive prototypes, and Buick decided the Buick Riviera should stick with rear-wheel drive.

Buick opted out of the front-drive program for a few reasons, particularly cost. In 1966 dollars, front-wheel drive made the Toronado $400 more expensive to manufacture than the Buick Riviera. Yet the 1966 Toronado's list price was only $161 more than the Buick Riviera's. Also, pre-prototype testing showed durability problems with the front-wheel-drive differential bearings. Here's basically what happened.

In 1963-1964, Buick had responsibility for that part of the Toronado's front-drive system between the Hydra-Matic and the inner constant-velocity joints. In other words, Buick's engineering research and development (R&D) department were charged with developing the front-wheel-drive differential mechanism and drive axles, a project that ended up in the lap of a 30-year-old Buick engineer named Jack DeCou.

The team was having problems burning up pinion bearings due to lubrication issues. DeCou and other engineers changed bearing angles and lubrication systems and redesigned the differential.

DeCou's boss, Phillip C. Bowser, cited a third reason why Buick chose not to make the 1966 Riviera front-drive. Buick engineers didn't like the way the big front-wheel-drive pretest vehicles rode and handled. They had a tendency to understeer, especially when pushed to the limit.

Bowser went on to become Buick's chief engineer in 1968, but throughout the first-and second-generation Riviera's development, Lowell Kintigh held that position. He remained, throughout his career, a staunch believer in over-the-road testing. To him, what a car felt like on the road meant everything.

According to those who worked with Kintigh, he had an almost unbelievable sensitivity for the feel of a car. He drove hard and fast, often dusting the lonely mountain roads of Arizona and Colorado at speeds that made his fellow engineers distinctly nervous.

Ride was one of Buick's hallmarks, but another was braking ability. Buick had almost always prided itself on its brakes. To evaluate the finned, aluminum-clad, 12-inch front drum brakes that appeared on the 1966 Riviera, Kintigh had his brake development people test them over and over down Pikes Peak. The test mules were put in Drive, driven hard down the mountain, then driven back up to come down again. The cycle was repeated a number of times.

The rear-drive 1966 Buick Riviera did end up sharing some of the Toronado's sheet-metal stampings. Both cars used the same cowl, roof, glass, and inner doors. The frame and undercarriage, though, were very different. According to Buick's chief body engineer, George R. Ryder, the 1966 Riviera used a cruciform frame similar to the previous generation's but exclusive to the Buick Riviera, with a 119-inch wheelbase for 1966-1970, two inches longer than in 1963-1965.

The 1966 Riviera also shared the Toronado's rocker sills and the rear section of the Toronado's floorpan. The Riviera had specific toeboards but a common floor from the third frame member back. Finally, Ryder notes that the 1966-1970 Riviera stood slightly taller than the first-generation coupe. It now had a single cardan joint in the driveline instead of doubles.

There's no question that Buick made the right decision in going with rear drive. After the Toronado's first year, when sales of Toronados and Rivieras ran neck and neck, Rivieras outsold Toronados by nearly 100 percent in 1967-1969 and by about 33 percent for 1970.

In the next section, learn more about the history behind the Buick Riviera's design.