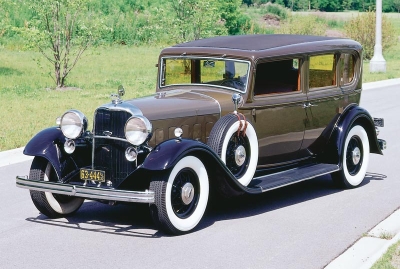 Lincoln and Cadillac had a common founder: the stern, patrician Henry Martyn Leland, "Master of Precision." Leland and his associates formed Cadillac in 1902 from the remains of the Henry Ford Company -- which is why his first Cadillac and the first production Ford, both named Model A, are so similar. William C. Durant bought Cadillac in 1909 for his burgeoning General Motors. Leland, meantime, went off to build Liberty aircraft engines during World War I. Then, with son Wilfred, he returned to the car business by forming Lincoln -- named for the U.S. president, one of his heroes. When this enterprise ran into financial trouble, Leland came full circle by selling out to Henry Ford in 1922.

At first, Ford Motor Company did little to alter or update the Lincoln Model L that Leland had designed around 1920. Powered by a 385-cid V-8 with 90 brake horsepower, it was beautifully built and handsomely furnished. But by 1930 it was an anachronism: unfashionably upright and sluggish next to contemporary Cadillacs, Packards, and Chrysler Imperials.

Then Henry and son Edsel brought forth the 1931 Model K (why they went backward in the alphabet remains a mystery). Its new 145-inch-wheelbase chassis carried a modernized, 120-bhp V-8 that retained "fork-and-blade" rods and three-piece cast-iron block/crankcase assembly, Leland engineering features that let ads dwell lovingly on "precision-built" quality.

The new chassis was massive, with nine-inch-deep side rails and six crossmembers with cruciform bracing. The transmission gained synchromesh on second and third gears. Like the L, the K employed torque-tube drive and a floating rear axle. Other features included worm-and-roller steering, hydraulic shock absorbers by Houdaille, and mechanical brakes by Bendix. Stylewise, a slightly peaked radiator led a far longer hood, punctuated by twin-trumpet horns and bowl-shaped headlamps. The K was also longer, lower, and sleeker than the L, and it offered an improved ride, greater stability and, with its extra power, faster acceleration and higher top speed.

That changed the following year when the KA exchanged its V-8 for a smaller bore 381.7-cid V-12 with the same 125 bhp. This was also installed in the shorter Lincoln chassis, topped by Murray-built bodies made of wood, steel, and aluminum. KB continued as the senior line.

The K-chassis had been designed for an all-new V-12 that arrived for 1932 in a new KB-Series. This was a smooth 448-cid engine with 150 bhp -- Ford's answer to the 12- and 16-cylinder giants from Cadillac, Packard, and others. The V-12 provided better performance than the K's V-8, yet KBs sold for slightly less and came in a wider range of body types. A magnificent around-town car and a fast open-road tourer, the KB was an extraordinary machine that stood far above most contemporary automobiles.

Accompanying the 1932 V-12 was the V-8 KA-Series on a 136-inch wheelbase. Its chassis was dimensionally the same as the old Model L's but structurally equal to the new KB's. The bodies were less lavishly furnished than on 12-cylinder models, but the KA was high-class, not a middle-priced product. Still, this V-8 wasn't as smooth as the engines from Cadillac, Packard, or Pierce-Arrow.

Whether it's automotive classics or cars fresh off the assembly line, we've got the honest truth on Lincolns. Check out these sites for more on the luxurious Lincoln.