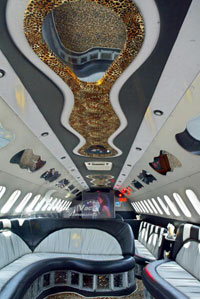 Image Gallery: Exotic Cars The 727 limo sits on a bus chassis and is a great example of decadence on wheels. See pictures of exotic cars.
Photo Victor Serra, Getty Images

­When thinking about the various trappings of wealth, you probably imagine huge mansions, enormous swimming pools, fancy clothes and, of course, beautiful limousines stocked with expensive alcohol and state-of-the-art electronic gadgets. While limousines were once a luxury enjoyed mainly by the extremely rich, today they're a staple of airport transportation and a favored way to arrive at formals, dances and weddings.

What exactly is a limousine? For many people, the word "limousine" conjures up the image of an incredibly long car with lots of dark-tinted windows. Actually, a limousine can be as simple as a nice Lincoln Town Car. There's no standard limousine make or model -- instead, the word refers to a vehicle that has a larger compartment in the back half of the car than your average automobile. To call a car a limousine, you really just need a nice car that has a lot of leg room in the rear compartment. It also helps if you have a driver, or chauffeur, driving the car for you while you relax in the back.

The word "limousine" comes from a town in France called Limousin. The original limousine wasn't a vehicle at all -- it was a piece of clothing. Shepherds in Limousin created a raincoat with a hood to protect them from the elements. They called this hooded cloak a limousine. Eventually, coach-builders in Paris began to call covered coaches limousines (some speculate the first coach-builder to do so was from Limousin). Wealthy passengers could sit under cover while a driver handled the horses [source: Lancashire Limos].

Stretch limousines like this one are popular choices for people going to formals, dances and weddings.
Photo Leo Cinezi, SXC

As the horseless carriage became popular, the term was applied to automobiles driven by a hired man to transport passengers, who sat comfortably in the back. Limousine services sprang up in places like New York City, where entrepreneurs foresaw a market for visitors who wanted to travel in luxury. As early as the 1920s, businessmen began to create limousine companies, some of which still exist today [source: Limo Broker].

In the next section, we'll learn about the common vehicles used as limousines.