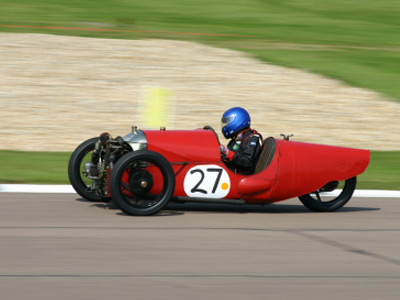 In the 1880s, German inventor Karl B­enz developed what is now considered the first truly modern automobile; howeve­r, this wasn't just an attempt to strap an engine to a horse carriage. In fact, that first automobile had a lot of features we still have on cars today -- a full suspension, rubber tires, a transmission and even an engine with a battery and spark plugs.

But there was one huge difference between the Benz Patent Motor Wagen and the vast majority of cars on the road now: it had three wheels.

­Benz wanted to create a four-wheel vehicle, but he simply couldn't develop a steering system he thought was adequate, so he connected the engine to two wheels at the rear and placed one up front that was controlled by a horizontal bar.

The world's first car may have been a three-wheeler, or trike design, but it was by no means the last. In fact, three-wheel cars were once very common on the roads, and even some of the larger automakers like Mazda and BMW made them. Today, three-wheelers are still on the road, and car companies continue to make exotic concept cars with just three wheels. But why make a vehicle with three wheels, anyway? What's the point?

The benefits include the potential for smaller size, making transportation cheaper, simpler and even more fuel-efficient. Many of them fill the gap between car and motorcycle, offering a package that's light and maneuverable like a motorcycle, yet with a car's seating and protection benefits. They also boast improved aerodynamics because of their inherently triangular shape, yet with one fewer wheel, some designs are not quite as stable and therefore are more prone to tipping over than conventional, four-wheeled cars.

However, there are plenty of them out there. Some are small cars, some are light-duty trucks or commercial vehicles, and others are pure performance machines not unlike big go-karts and motorcycles. Some have two wheels up front, others have just one. The designs are as widely varied as the Reliant Robin, a snub-nosed three-wheeler that looks a lot like a clown car, to the Campagna Motors T-Rex, which can accelerate from 0 to 60 miles per hour (0 to 96.6 kilometers per hour) in about four seconds.

In this article, we'll learn about the history of three-wheeled cars and get an idea of the variety of three-wheelers that are out there. We'll also take a look at how owning one might be easier than you may think.