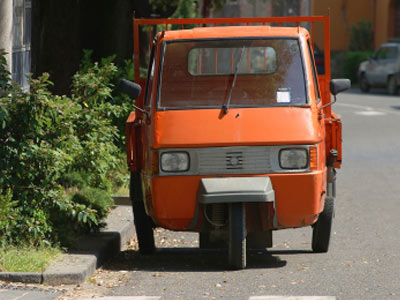 Across the world, three-wheelers are popular as light-duty ­utility vehicles.
©­iStockphoto.com/Thomas Bedenk

Three-wheeled cars have been around for a very long time, even pre-dating the Patent Motor Wagen design. For instance, in the 15th century Leonardo da Vinci created sketches of a primitive, three-wheeled car that was propelled using a wind-up mechanism similar to a clock. And French engineer Nicolas Cugnot created a large, tractor-like vehicle in 1769 that used a three-wheel design and was powered by a steam engine.

As the world moved into the 20th century, three-wheelers gained in popularity as low-cost, lightweight vehicles -- that is, until about the late 1920s, when cars generally started going more along the four-wheel track.

But after World War II, things changed once again. In war-torn countries like England, France, Germany and Japan, gasoline and mechanical supplies were scarce, but people still needed a way to get around. In many cases they couldn't afford full-sized, four-wheel cars or those cars simply weren't available and a motorcycle was far too small to meet their needs.

In postwar England, Bond Cars Ltd. found success in making small, three-wheel cars powered by single-cylinder motorcycle engines. These small cars proved popular among motorcyclists looking to protect themselves from the elements, and as an added benefit, the car didn't require an automobile driver's license. In addition, their ability to achieve more than 100 miles per gallon (42.5 kilometers per liter) was extremely helpful at a time when fuel was expensive and supplies were scarce. Bond Cars continued to make three-wheelers well into the 1970s.

BMW began selling a three-wheel version of the colorful, egg-shaped Isetta micro car during the 1950s. Again, the three-wheel variant of this car was extremely popular in Great Britain, because they could be driven there with a motorcycle license. In Japan, car companies like Daihatsu made three-wheelers that became popular as taxis, light trucks and other utility vehicles. Again, many were small and powered by inexpensive motorcycle engines. England's Reliant Robin, a fiberglass micro car, was made off-and-on for more than 30 years, and arguably remains one of the most iconic three-wheelers of all time.

But where do three-wheel cars fit in today? While it's true that there are far less of them around now than in the 1950s and '60s, modern examples include the electric CityEl, the performance-minded Can-Am Spyder and numerous exotic concept cars from companies like Volkswagen and Peugeot.

So, three-wheelers are more common than many people may think. In the next section, we'll find out about the many different ways three-wheeled cars are designed.