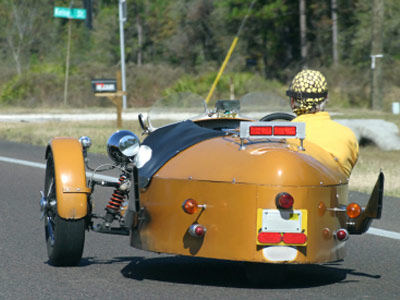 Most three-wheelers handle extremely well since they tend to have a low center of gravity.
©­iStockphoto.com/Lisa F. Young

Whenever gasoline has been scarce or expensive, three-wheel cars have been there to provide people with the efficient transportation they need. Many of the early three-wheeled vehicles ran on motorcycle engines and they were great at sipping fuel, while also providing the storage space, seating and protection from the elements you can only get from a car.

In addition to hosting smaller engines, the triangular shape is more aerodynamic than a boxy car, meaning it can achieve better fuel economy simply from its body design alone.

They also offer far more safety than motorcycles. While smaller than cars, many of them have enclosed bodies with seatbelts and windshields, keeping the driver and passengers protected from outside impacts.

A three-wheeled car's small size -- plus the inclusion of a powerful engine -- can mean exciting performance as well. The F3 Adrenaline, a three-wheel vehicle from TriRod, is made of carbon fiber and boasts a powerful V-Twin engine. Because it has three wheels, it's built much lower to the ground than a typical motorcycle and that lower center of gravity gives it incredible handling characteristics.

Keep in mind that three-wheelers are also much more stable than their two-wheeled cousins. You don't have to worry about learning to balance a three-wheeler or putting your foot down to keep it upright when the vehicle stops. The vehicle's triangular base means it can support itself, and they also don't have the uncomfortable seating that characterizes motorcycles.

Also, in many countries, a three-wheeler is treated as a motorcycle for licensing and title purposes. Many drivers like this because they can own a three-wheeled car without going through the trouble of getting an automobile driver's license.

We've looked at some of the advantages three-wheeled cars have over vehicles with an even number of wheels -- now what are the drawbacks?