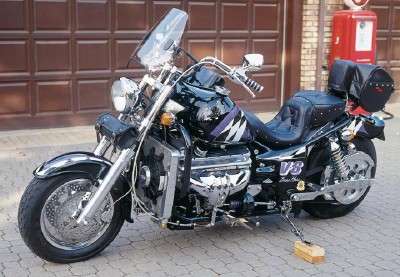 The 1996 Boss Hoss is the epitome of the "bigger is better" philosophy. See more motorcycle pictures.

No question about it, the 1996 Boss Hoss motorcycle is the biggest, baddest bike to ever roam the streets. And lest it be discounted as some kind of one-off custom-built absurdity, rest assured the Boss Hoss is a production vehicle -- though production is admittedly limited.

At the heart of what is perhaps the ultimate expression of the "bigger is better" philosophy is a Chevy V-8. Most, such as the example pictured, use the venerable small-block variant of 350 cubic inches -- that's 5700 ccs -- but newer versions are available with a big-block V-8 of 502 cubic inches.

Horsepower output ranges from 355 for the base small-block to 502 for the hottest big-block. Yes, of course that's absurd.

Boss Hoss was founded in 1990 by Monte Warne, who decided to begin selling copies of his outrageous V-8 motorcycle after it drew crowds -- and numerous potential buyers -- at that year's Daytona Speedweek celebration.

Approximately 1,750 have rolled out of the Dyersburg, Tennessee, factory since then, though production is now up to about 300 per year. Recently, V-6 versions (with "only" 200 horsepower) have been added to the roster, as have three-wheeled trikes.

Early versions had a one-speed transmission with hand-operated, vacuum-assisted clutch, but the clutch was later replaced by a torque converter­, and current machines get a two-speed automatic.

But such is the price to be King.

See the next page for more pictures of the 1996 Boss Hoss motorcycle. 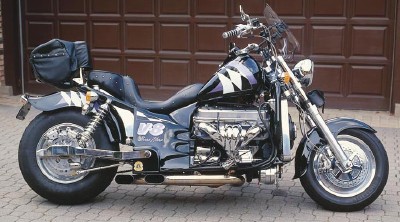 A nine-gallon gas tank supports a full set of gauges.
Triple disc brakes nearly hide the wheels.
The rear tire of the Boss Hoss is from a car.
The taillight proudly announces the Boss's muscle.