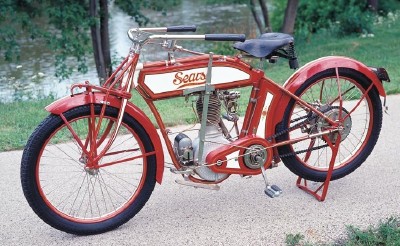 The 1914 Sears Deluxe was available for purchase in the famous Sears and Roebuck catalog. See more motorcycle pictures.

The 1914 Sears Deluxe motorcycle was the retail giant Sears and Roebuck's entry into the highly popular motorcycle market of the early 20th Century.

In the early catalogs from Sears and Roebuck, you could order almost anything -- including a house. And in the 1912 catalog, Sears offered its first motorcycle.

This 1914 Magneto Model, complete with the 35-cubic-inch Deluxe "Big Five" engine, sold for $197.50 and was claimed to have nearly the same power as larger twin-cylinder motorcycles. These single-cylinder versions were available with batteries or a Bosch magneto.

Two twin-cylinder motorcycles were also offered, one producing seven horsepower, the other nine. The engines in all Sears machines were manufactured by Spake, which sold them to a variety of builders.

As with most makers of motorcycles in this period, Sears claimed high quality and proven performance for its models.

The handlebars of the 1914 Sears Deluxe motorcycle were made of double-reinforced tubing and the fuel tank was formed out of anti-rust material.

A trailing-link fork with leaf spring handled suspension chores in front, but a seat mounted on coil springs made do in the rear.

Sears sold these early motorcycles until 1916, when they were removed from the catalog. But Sears returned to motorcycle retailing between 1953 and 1963, when it offered a line of cycles manufactured by Puch under the Sears-Allstate moniker.

For more pictures of the 1914 Sears Deluxe motorcycle, go to the next page. 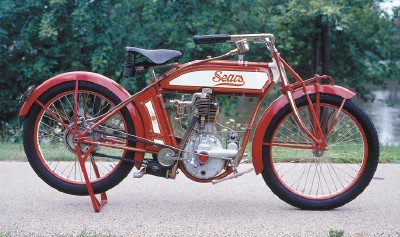 Sears amd Robuck sold these early one- and two-cylinder motorcycles between 1912 and 1916.

The 1914 Sears Deluxe was built with parts from various manufacturers, and featured Spake engines.

The Deluxe's tank-mounted speedometer was driven off a spiral gear on the rear hub.
A Bosch magneto sat ahead of the crankcase of the 35-cubic-inch Spake-built single.
Sears called its 1914 Sears Deluxe bike an "Auto Cycle."